All Down the Line 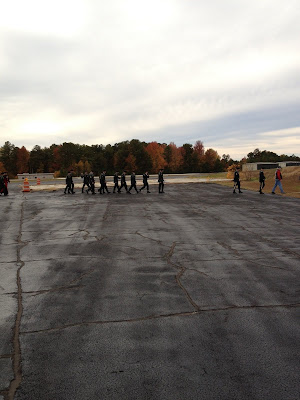 On a gray, windy fall afternoon just south of Atlanta, 16 American soldiers lined up to tell ordinary people about an extraordinary man.

"We survived it," Pfc. Faulkner's company commander said, emphasizing the heroism of all his soldiers. "When it's all said and done, Jeremy's actions speak louder than (anything) we can do here."

Many of these soldiers returned from Afghanistan just weeks after the bloody battle. Nearly eight months later, as they check up on wounded buddies and miss their fallen friends, the Fort Campbell-based paratroopers flew by helicopter to Griffin, Ga., to present Pfc. Faulkner's family with the soldier's posthumous Bronze Star for Valor.

During the emotional ceremony, their minds must have wandered back to eastern Afghanistan's hellish mountains, where explosions and gunfire filled dark, treacherous valleys.

"I try not to think about that day so much," one soldier said, as Faulkner's family sat just a few feet in front of him. "I just think of the days before that."

While saluting Faulkner's bravery on the battlefield, remembering the good times is important to this tight-knit group.

"I miss Faulkner a lot ... he was a good friend of mine," another soldier said. "There was never a dull moment with him."

While laughing isn't easy, especially after seeing close friends killed and wounded, several Task Force No Slack troops, who spoke despite enormous grief and pressure, tried to lighten the mood.

"Jeremy was one of the smartest soldiers I met," a fellow paratrooper said. "He was always trying to learn and know his job.

"But he was always the first to get yelled at," the soldier added, prompting laughter.

Still, tears began to flow when one tall, strong warrior, who looked like he could singlehandedly destroy a terror cell, could barely speak through his grief.

"I really can't say too much or I'm going to get choked up," he said.

One Army specialist, who appeared older than the troops standing to his left and right, touched the audience with his candor.

"I miss him," the soldier said before a painful pause. "And I loved him very much."

Nobody loved Jeremy more than his mother, Judy Berry. We spoke two days after the Nov. 10 ceremony.

"It made me real proud," Berry said. "But no matter how many medals or stripes — whatever your soldier gets — you'd much rather have him."

Jeremy's mom feels a close bond to her son's brothers in arms, who approached telling his story with the same fearless dedication they showed on the battlefield.

"I didn't realize how many lives he had saved until I got a call from Afghanistan," she said. "Those boys are like my boys now."

While Berry had spoken with several soldiers by phone, the mom was overwhelmed by seeing them recount her son's final moments.

"(I have to) forget about myself and try to lift them up," Berry said. "I didn't really understand that a lot of them were hurting the way they were."

She wants Jeremy's friends to know that her son's death was not their fault.

"It's very emotional for all of them," she said. "I know a lot of them feel like they should have been out there instead of him."

While Nov. 11 was Veterans Day, the raw, dignified emotion inside the Georgia National Guard Armory showed that for some, every day is Veterans Day. Combat veterans live with emotions that few can comprehend, and concern for their well-being must be paramount.

After the last soldier spoke, the audience paused to admire this remarkable line of heroes, who stood together in silence before the moving ceremony's conclusion. It was then that I reached a conclusion of my own.

While survivors of the Mar. 29 firefight are still being challenged, they have already won another battle since returning home. They have succeeded in keeping Pfc. Jeremy Faulkner's spirit alive.

"We know where you are," a brother in arms said. "And we'll see you again." 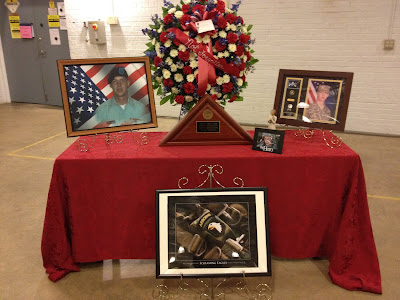