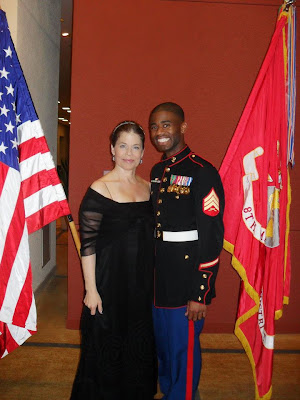 For several months, Marine Sgt. Ray Lewis, 29, has been known as the guy who asked "Golden Girls" actress Betty White to the Marine Corps Ball, only to be turned down because of a scheduling conflict and asked instead by "Terminator" star Linda Hamilton.

As I'm sure Hamilton, who is instantly recognizable for her legendary film portrayals of "Sarah Connor," would agree, Sgt. Lewis is much more than a man asking a lady to dance. He's a brave United States Marine.

Sgt. Lewis was working his way through college when he first heard about the United States Marine Corps. One of his instructors had served in the Marines, and Lewis never forgot the values he espoused.

"His attention to detail and his professionalism...it's always going to stay with me," Sgt. Lewis told The Unknown Soldiers. "It's something I'm always going to remember."

After graduation, Lewis struggled to find a new job in his hometown of Oceanside, California, even with a college degree. The Taco Bell employee made several visits to the local Marine Corps recruiting office, asking how he could serve his country while also pursuing a career related to the spoken word. As an aspiring rapper, Lewis loved telling a story, and he hoped he put that to use as a Marine.

That's exactly where he went. After heavy training, Lewis deployed to Iraq in 2005 as a combat correspondent. While travelling Iraq's dangerous roads and photographing the war, he said one particular incident, involving children he encountered during a patrol, changed his life.

"This time, instead of asking for candy or pencils, the Iraqi kids, they asked for water," the Marine said. "It was around holiday time, and I have little brothers and they have friends...and they're asking for X-Boxes and toys.

"On the flip side, on the other side of the world, in Iraq, they're asking for water," Lewis continued. "Just drinkable water, because the river was contaminated."

When the Marine later deployed to Afghanistan, his life-altering experience was still in the front of his mind. To the combat correspondent, who took his responsibility to tell the story of war very seriously, the conflicts were about people.

"A lot of (Americans) go by what they see in the media and on the news, and they don't realize that there are people out there that need help," the Marine said. "A lot of them live out in tents in the desert, very primitively, but they're people like you and me."

White responded with regret, saying a scheduling conflict made attending the Ball impossible. Lewis said he actually breathed a sigh of relief, thinking that the media blitz that accompanied his viral video would finally calm down. Then, out of nowhere, Hamilton posted this YouTube video:

The next thing the Marine knew, he was picking up Hamilton from the airport. He didn't know what to expect. Was she the tough, hard-nosed woman she portrayed in "T2?"

"A lot of our conversations after she got to Texas were just like a regular person, real down to earth," Lewis said.

One of the most fun aspects of a "surreal" experience was seeing the reactions of his fellow Marines at the Oct. 29 Westlake, Texas, Marine Corps Ball.

"A lot of them were like 'hey...is that Sarah Connor?'" he said. "Or some people would come up to me, and say 'hey...Linda Hamilton's right there, she's in the hotel!"

For Sgt. Lewis, though, the Marine Corps Ball was not about him, nor the Hollywood celebrity who accompanied him there. It was about celebrating the 236th birthday of the Marine Corps, which falls on Nov. 10, and thinking about Marines who are risking their lives, as he once did.

"While we speak right now, there are Marines out there patrolling, just to make sure...we set an example and set a standard so (enemies) don't come over here and attack us," the Marine said. "When I start to take things for granted, I think about them."

Too often, Hollywood and the national media unfairly brand Marines on the battlefield as soulless killing machines. Lewis, who served soft drinks to thousands of Americans at Taco Bell before a desperate Iraqi child pleaded with him for water, proves that ugly stereotype false. Like thousands and thousands of fellow Marines, Sgt. Ray Lewis serves his country because he cares about people.

"The unknown future rolls toward us. I face it for the first time with a sense of hope," she said. "Because if a machine -- a terminator -- can learn the value of human life, maybe we can too."

Marines, while trained to kill on the battlefield if necessary, are not terminators. They are among the very best people to populate and protect the greatest country on earth. 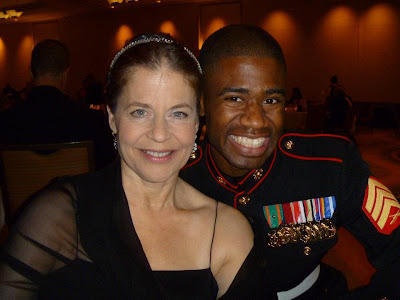