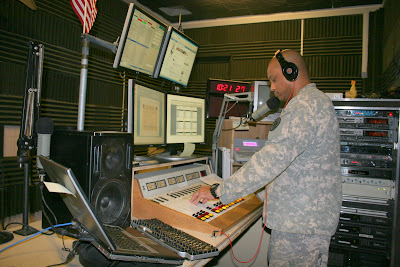 In much of the western world, the days of children gathering around radios, as Roger Taylor wrote in the hit Queen song "Radio Ga Ga," are long gone. In an age of iPods, iPhones and SiriusXM, antenna radio's once strong signal is fading rapidly.

In Iraq, which has been in a perpetual state of war for three decades, many children still congregate around radios. It is in Baghdad, where Saddam Hussein's iron fist was left on the ash heap of history, that Staff Sgt. Brad Ruffin has served since December.

Staff Sgt. Ruffin, 42, served in the Marines before joining the Army. This soldier is ready for battle. Yet while deployed to the Iraqi capital, one of his most important jobs has been entertaining U.S. troops and Iraqi citizens on American Forces Network-Iraq's Freedom Radio.

With the number of American boots on the ground shrinking by the day in the midst of a continuing U.S. withdrawal, AFN-Iraq is shutting down. While speaking with the Unknown Soldiers from Baghdad just hours before its final broadcast, Ruffin reflected on the station's legacy.

"I guess for me, being on the radio during this deployment is the one thing I'm going to reflect on most," the soldier said. "Hopefully someone out there — maybe a little kid — it inspired them to become a musician or get into TV."

The first song ever played on Freedom Radio, as the Iraq war took shape in 2003, was Paul McCartney's "Freedom." The last was Toby Keith's "Courtesy of the Red, White and Blue" on Sept. 23, 2011.

Ruffin is proud of what the radio station meant to war-ravaged Iraq.

"The locals are appreciative," he said. "I've been talking about this to other troops who I come in contact with."

Still, the Plano, Texas, soldier desperately misses his wife and child. They are waiting near Charlotte, N.C., for his return, which is expected sometime this fall.

"Sometimes it's frustrating to be away from home," Ruffin admitted. "But it's great to be helping others out."

As soldiers with the Army's 206th Broadcast Operations Detachment spent months taking phone, email and Facebook song requests from around the world, Ruffin realized the continuing power of music, which connected troops and their families through the spirit of radio.

"People in the United States are asleep, and they wake up in the middle of the night to get a message to their son or daughter," he explained. "Or even a soldier that's returned home — they'll call or email to request a song."

Ruffin, who knows first-hand about the stress of deployments, was deeply moved by the burst of patriotic enthusiasm.

"That stuff blows me away," Ruffin said. "These people are obviously either staying up or waking up just to let us know how much they appreciate what we're doing here."

Hours before Freedom Radio's swan song in Iraq, requests were still pouring in on Facebook from the home of the brave.

"I'm sending a shout-out to my son stationed in Iraq, Spc. Justin Buderer," Lynn Buderer posted on Sept. 23. "Play 'Rocky Top' for him and all of the other Tennessee Volunteers deployed there!"

"I would like to send a shout-out to my husband, Sgt. Micheal Picon, serving there in Iraq," Christina Vara-Picon wrote the same day. "Be safe and hurry home. Godspeed!"

Iraqis were also emotional about the end of Freedom Radio in their country.

"Thank you AFN-Iraq for all the great songs and the beautiful memories," Hassan Timimy wrote. "We will miss you, and you will always be in our heart and soul for all the good times that we spent with you."

Freedom Radio has signed off in Iraq. But in Afghanistan, one of the world's most dangerous, impoverished countries, Afghan children and American troops still sit alone, watching a radio's light flicker during the abundant darkness of war. On Freedom Radio Afghanistan, the hard work of soldiers like Staff Sgt. Brad Ruffin endures.