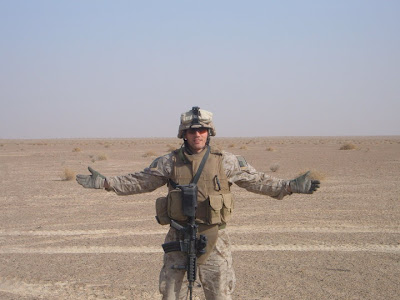 When 1st Lt. Travis Manion was asked why he had to repeatedly risk his life in faraway lands, his response was simple, but direct:

That stirring quote sits on my desk every single day, engraved on a silver plaque. Along with "be bold, be brief, be gone" -- the unforgettable mantra of Marine Maj. Megan McClung -- 1st Lt. Manion's words have guided this humble chapter of my career.

Manion, 26, was killed in Iraq's Al Anbar province on Apr. 29, 2007, while attacking the enemy, saving the wounded, and diverting sniper fire away from his fellow Marines. In awarding the Silver Star to this fallen American hero, Gen. John R. Allen, who now commands U.S. forces in Afghanistan, referred to Manion as one of America's greatest post-9/11 heroes.

"Travis strode like a giant wherever he went," the general said. "He had a personal role in the liberation of Fallujah...and the shining example Fallujah has now become."

The son of Col. Tom Manion and Janet Manion, the example set by this Marine is one for an entire generation of Americans to follow. Among the first to take his lead was one of Manion's closest friends, Lt. Brendan Looney, the Marine's Naval Academy roommate who dedicated the rest of his Navy SEAL training to Travis. "If not me, then who..." wasn't just a quote to Lt. Looney, it was how he would live the rest of his life.

I first spoke to Ryan Manion Borek, Travis' older sister, about three weeks after Looney, 29, was killed in a tragic Sept. 21, 2010, helicopter crash that killed nine American troops in Afghanistan's Zabul province. Her brother's grave had just been moved from Pennsylvania to Arlington National Cemetery so he could rest in eternity next to Brendan.

While interviewing Ryan for what would later become my first syndicated newspaper column, she mentioned the Travis Manion Foundation, which was spearheaded by her mother's tireless dedication to honoring Travis and all fallen heroes. The foundation was doing wonderful things for Gold Star families and the entire nation.

"We have to continue their mission of service," Travis' big sister said. "We will carry on the foundation in Travis' name and Brendan's name as well. They left this world with so much to give."

About a year later, Ryan, who is the Travis Manion Foundation's Executive Director, asked me to become the organization's Community Manager. As I told her on Monday, to help this fine organization, in the spirit of Travis and Brendan's enduring legacies, is the honor of a lifetime. Without hesitation, I accepted the offer.

The Travis Manion Foundation honors the fallen while challenging the living. The Unknown Soldiers blog fully embraces this cause, and is humbled to join forces and learn from the foundation's leadership team, distinguished board of directors, and expert advisory board.

Most of all, I am honored to work for Janet Manion, Travis' mother and the Foundation's Chairman. For beginning this noble effort during a period of such overwhelming grief, and for seeing it through, you are a true visionary for all Americans to admire, Mrs. Manion. I didn't have the privilege of knowing your son, but I know he would be proud of you, Col. Manion, and your daughter.

I urge everyone to read about The Travis Manion Foundation's innovative programs. The foundation awards Challenge Grants to survivors of fallen heroes who challenge themselves in a creative way to honor their loved one. It also partners with The Mission Continues to help wounded and disabled post-9/11 veterans serve their communities in honor of fallen heroes.

The Character Does Matter program brings "If not me, then who..." to children, some of whom may not realize that America is still at war. Through heartfelt, informative school presentations, students are challenged to adopt a fallen hero and perform meaningful service projects in his or her memory. Students then write essays about their work, with the chance of being awarded scholarships for the most moving examples of character-driven service.

The 9/11 Heroes Run started with a single event in the Manions' Philadelphia-area hometown of Doylestown, Pa., where the foundation is based. By Sept. 11, 2011, more than 15,000 people were participating in 29 U.S. cities and 8 international locations, including Afghanistan, Guam, England, and Italy. The incredible success of this unifying event, which brings Americans together on each 9/11 anniversary, is a shining light in a nation at war.

Soon, the silver "If not me, then who..." plaque sitting on my desk will arrive at its rightful destination: 1st Lt. Travis Manion's hometown.

While I am nothing compared to a man who a general called a giant, I hope that my writing about our warriors and their families can, in some small measure, live up to this legacy of great significance.

As I am learning more and more each day, 1st Lt. Manion didn't go to Iraq to become a hero. He wanted to do his duty as a Marine and protect the people around him. That's why there are only five words that can adequately sum up how we should challenge ourselves to honor the men and women who made the ultimate sacrifice for our freedom.


Note: Please consider supporting the Travis Manion Foundation's worthy cause by making a financial contribution or volunteering your valuable time.