A Story for Us 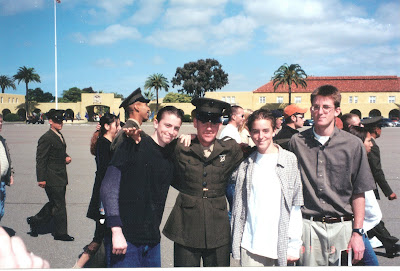 Maria Simpson vividly recalls the day her oldest son, Abraham, first met his teenage cousin, Jonathan, who was visiting from Quebec. The adults were chatting downstairs at her family's Chino, Calif., home when they heard a small commotion above them.

"They were upstairs playing with the (toy) Army men," Maria told The Unknown Soldiers. "Jonathan had hidden snipers in the dog's fur."

Even as teenagers, the mutual respect the cousins shared for the military eclipsed all communication boundaries.

"Jonathan hardly spoke English at the time," Maria explained. "But they got along great."

When Jonathan, who became a dual U.S.-Canadian citizen on July 4, 2001, graduated from boot camp shortly after 9/11, Abe was there to congratulate him.

When Abe enlisted out of high school, his parents were not surprised. Maria's Navy husband, Jim, has always encouraged their three sons to serve.

"I knew he would be going into the military since he was young," Maria said of Abe. "Everyone who knew him knew he was going to become a Marine."

As Jonathan navigated C-130 aircraft in Okinawa, Japan, Abe trained hard to make their shared dream of military service a reality. He graduated from basic training and began preparing for a deployment to Iraq.

"Abe seemed pretty focused," the Marine's mother said. "I don't think he was scared at all."

Before he left for Iraq, Lance Cpl. Abraham Simpson, 19, told his parents that if anyone in the 3rd Battalion, 1st Marine Regiment had to die in battle, he wanted to be the one to make the ultimate sacrifice. As a young man of deep faith who gave a portion of every dollar he earned to his church, Abe viewed death as a new beginning.

"He knew where he was going," Maria said. "He would have taken a bullet for another Marine."

On Nov. 9, 2004, Abe, who had just switched places with another Marine in a mortar line, was hit by a rocket-propelled grenade fired by terrorists in Iraq's Al Anbar Province. He died instantly.

The next morning, Maria, who knew Abe was in grave danger, was getting in her car when she saw a military van driving slowly down the street. The Marine mom knew the war had hit home.

"I thought, Oh my Gosh, Abe's in the battle of Fallujah," she said.

The van drove past her house, prompting Maria to worry that another family had lost a son or daughter. She had almost backed out of the driveway when the van turned around.

It was then that she knew Abe was in heaven.

Upon learning of his cousin's death, Sgt. Jonathan Simpson boarded a flight in Japan.

"Jonathan was a pallbearer at the funeral," Maria said. "At that time, he told me he would make the switch to infantry in order to honor Abe's service."

On Oct. 16, 2006, Jonathan, who once hid toy snipers in the fur of Abe's dog, died in the same Iraqi province as his cousin. He was killed by an enemy sniper's bullet.

"We had already done this and never wanted to do it again," Maria said while describing her 25-year-old nephew's Quebec funeral. "He was such a polite young man and very respectful."

"We hadn't had a Simpson come back from combat alive," she said. "I was always looking at the door to see if someone was knocking."

The knock never came. Paul, 23, who served in the same Marine unit as his big brother, made it home safely. Maria's youngest son plans to join the military as well.

The loved ones Abe left behind aren't intimidated by death.

"Our protection is placing our situation in God's hands," Maria said. "Nobody wants it to happen to them, but on the other hand, why should it happen to other people and not me?"

Seven years after losing Abe, Maria shares his story, as well as Jonathan's, so fellow Americans know what's been sacrificed for their freedom.

"He was our son, but at the moment he died, he became an American son," she said. "I think his story belongs to all of us." 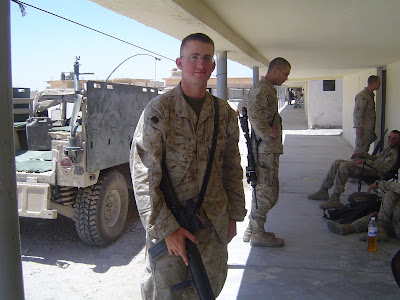