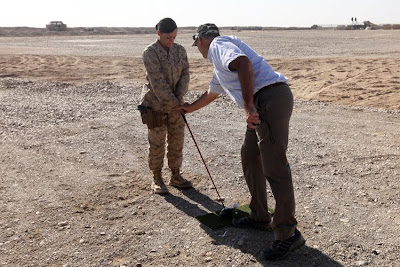 When the Marine pictured above signed up to serve our country and later deployed to Afghanistan, I seriously doubt she thought getting golf lessons from a British Open champion would be part of her benefits package. But thanks to the Troops First Foundation, Marines at Camp Leatherneck spent part of their Thanksgiving learning how to hit out of the sand from PGA Tour professional Tom Lehman.

I first learned about the Troops First Foundation back in February while writing a piece for the USO about a group of wounded veterans who got the chance to return to war zones as part of Operation Proper Exit, an incredibly valuable USO-T1F initiative. While researching the article, I had the honor of speaking with Rick Kell, who co-founded T1F along with CBS Sports golf analyst David Feherty.

Just moments after our phone conversation began, I heard Kell's passion for our troops and veterans. His admirable mission to dedicate his life to supporting our military began shortly after visiting with wounded heroes at Walter Reed Army Medical Center, and he hasn't paused to think about himself since. He's donated significant personal time and treasure to put smiles on the faces of our troops, and has traveled into war zones to visit them about 20 times. In February, Kell told The Unknown Soldiers that Operation Proper Exit, which aims to help combat veterans heal emotional wounds and re-join society, is the organization's most important initiative.

"On these trips, I have seen 18 people change physically in front of my eyes," Kell said during the interview. "To simply tell you that does not do it justice."

Marines stationed at Camp Leatherneck, located in Afghanistan's violent Helmand province, are tasked with extremely difficult missions, often completed amid grave danger. The day before Thanksgiving, Lance Cpl. Arden Joseph Buenagua, a 19-year-old Marine from San Jose, California, was killed in action while serving with the 1st Combat Engineer Battalion, 1st Marine Division, I Marine Expeditionary Force. As Marines mourned his death while spending Thanksgiving apart from their families, these brave men and women needed something to smile about.

Country music artist Matt Snook was also part of the T1F visit, and he took requests from the troops during a special Thanksgiving dinner set. Snook also visited wounded heroes and handed over his guitar to Marines who wanted to relax, play a few chords, and forget about the Taliban for a few minutes.

I have great admiration for Rick Kell, David Feherty, Tom Lehman, Matt Snook, and all members of the Troops First Foundation, which gratefully accepts donations. In an age when America's battlefield heroes are often relegated to the background by a celebrity-obsessed, media-driven culture, this fine organization, which includes many influential sports figures, has hit a hole in one. As Wednesday's tragic death of Lance Cpl. Ardenjoseph Buenagua shows us, the realities of America's post-9/11 conflicts are often brutal, harsh, and unforgettable for the men and women who serve. So when a group of people step up to give our heroes some happiness, it truly means the world. 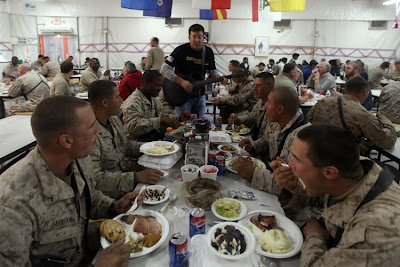