The surprise of a lifetime 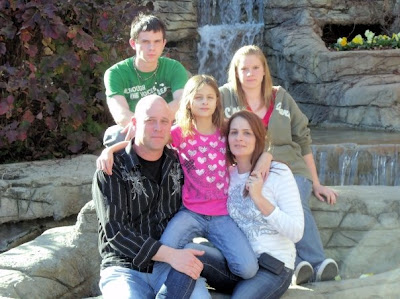 When Jodi Foster stepped onto Nashville's LP Field during the Tennessee Titans-Washington Redskins game on November 21, she thought she was simply being recognized for an essay contest she won by writing about her husband, Sgt. Mark Foster, a 101st Combat Aviation Brigade soldier deployed to Afghanistan. Standing beside the couple's 12-year-old daughter, Kayla, the 33-year-old Army wife got a nice surprise when a video message from her husband played on the NFL stadium's jumbotron.

While it certainly made for a nice memory, the mother and daughter would still have to head home after the game and join Cody, 18, and Hunter, 17, to prepare for another holiday without dad. Maybe Sgt. Foster would get to call from his remote Forward Operating Base on Thanksgiving, but that would be about it.

Then, just after the video message played, 69,143 football fans started rustling, quickly growing louder and louder. The military wife sensed that something big was about to happen.

"I was looking around the field and didn't really see anything, nothing except the huge jumbotron" Jodi Foster told The Unknown Soldiers. "I could not believe it; he wasn't due on leave until [December], but then I saw him coming out on the golf cart."

As soon as the wife and daughter saw Sgt. Foster, they ran quicker than any Titans or Redskins running back, and clutched him tighter than any defensive lineman who brought down a ball carrier on the same field that day. As they embraced on the ten yard line, a capacity crowd and many more watching at home saw what it really means to be a nation at war. Fox Sports play-by-play announcer Dick Stockton put it best when he said "this may be the highlight of this game." As a big Redskins fan (my apologies to the Fosters), I was watching when this incredible moment occurred, and he was absolutely right.

Of the almost 70,000 people inside the stadium that day, the surprise meant the most to young Kayla, who the couple calls "daddy's girl."

"My dad loved me enough to adopt me," Kayla is quoted as saying in the family's winning essay. "No one gave me to him, mom; he picked me."

The improbable, emotional moment that captivated millions around the nation was one that the soldier himself never thought would occur.

"I didn't expect to go out on the field," Sgt. Foster, 38, told me from his family's home on Fort Campbell. "In fact, I didn't find out until after I landed in Nashville."

Many good folks inside the U.S. Army, Tennessee Titans, and Campbell Crossing housing community came together to give this military family a much-needed holiday boost. This is Sgt. Foster's fifth combat deployment, having served four previous tours with the Screaming Eagles in Iraq, and with a concerned wife and three children on the homefront, it hasn't been easy. In addition to missing his family, the soldier has also been dealing with the loss of brothers in arms like Staff Sgt. Brandon Silk, a departed warrior who was profiled by this blog in July.

"Staff Sgt. Silk was a great guy; there's nothing bad that I know of or can say about him, and so many of us knew him on a personal level," Sgt. Foster said of his fallen comrade. "People knew him when he was in Korea, and when he first got to Fort Campbell, and he was just an awesome guy, a great guy, who is truly going to be missed by a lot of people."

Having never served in the military and experienced this type of pain, I asked Sgt. Foster how he can carry on with his fellow troops after losing such a fine volunteer warrior and friend.

"Emotionally, we’re all in this job, and we know what we’re up against," the soldier explained. "It sucks, and next to losing a parent, spouse, or child, I don’t know of a harder feeling, but we all know the risk involved when we join. We also know that yes, we have a fallen comrade, and we'll all take time to mourn, but we still have a job to do."

While there are many unsung heroes of America's post-9/11 conflicts, I believe the courage displayed by spouses of our deployed troops and returning veterans is frequently overlooked. I asked the soldier's wife how she manages the household, children, finances, and many other critical responsibilities during her husband's frequent deployments.

"Like I tell my mom, I have to put on my brave face," Mrs. Foster quickly responded. "I have to...I have no choice, because if I fell apart, what happens to my kids?"

The newest member of the Foster family, adopted about two years ago, has been a rock during the last eight months, despite being just 12 years old.

"She’s stronger than I am," Kayla's proud mom said. "[After] we first dropped him off to deploy, I spent a few days crying and in bed, but she got me up, told me he'd be fine, and kept me strong."

Four days after the surprise of a lifetime, the family celebrated Thanksgiving together.

"It's the best feeling ever, having him home after eight months," the soldier's wife said. "It's been amazing."

"It's been a whirlwind, but it's great being home," Sgt. Foster added.

It won't be long before the soldier is back in Afghanistan to finish his deployment. The humble warrior calls himself "lucky" to be assigned to a Forward Operating Base with better communications capabilities than most in the rugged, war-torn nation where the September 11th attacks were planned. Despite relatively reliable phone lines and a decent internet connection, some of the calls back home are tense.

"[Jodi] still gets to hear my voice and I get to hear hers," he said. "But sometimes there is incoming fire in the background, and I hate when she has to hear rounds and we go to blackout, and she has to sit here for hours pondering."

Sgt. Mark Foster will almost certainly be wishing his family a Merry Christmas over the phone or Skype this year. But with the memories of the family's special, unexpected Thanksgiving together still fresh, Jodi Foster insists that her deployed husband will still be joining his loved ones for Christmas dinner.

"We'll put his picture on the head of a chair, and maybe even put a video camera on the chair. We'll stay connected. He may not be here this year, but he's still a part of Christmas and our lives." 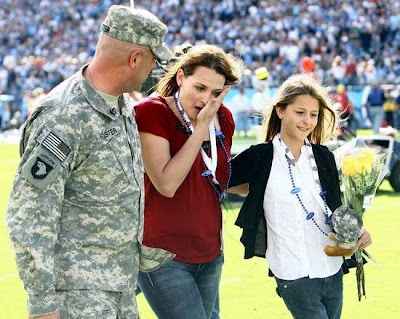