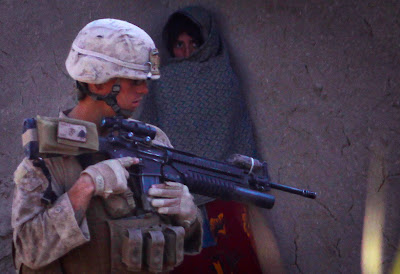 Since December 1, the Pentagon has identified 15 American casualties from the war in Afghanistan, including six 101st Airborne paratroopers murdered by an Afghan border officer on November 29. The following nine fallen Soldiers and Marines were killed in action between November 30 and December 6. From frigid Sudbury, Massachusetts, where it snowed on Monday, to the shores of Honolulu, where this week's temperatures are reaching 80 degrees, military families are mourning tragic news delivered from the war on terror's central front.

The dramatic image above, taken by Cpl. Daniel Woodall on November 28, shows the daily tension many of our troops experience in combat. It turns out that Sgt. Jacob Bublitz, a combat engineer with Engineer Company, Combat Logistics Battalion 3, 1st Marine Logistics Group (Forward), was providing security while fellow Marines worked on paving a roadway in Afghanistan's volatile Helmand province. It may not have gotten many headlines, but Sgt. Bublitz and his brothers in arms put themselves on the line that day to make the lives of Afghans better.

Striking pictures like the one above only increase the emotional impact of images like the photo displayed below, which was taken by Lance Cpl. Andrew Thorburn on December 3. It shows Cpl. Cesar Rojas, a Marine with Battery L, 3rd Battalion, 12th Marines, embracing his family after a seven-month deployment to Afghanistan. This wasn't just a reunion at the Marine Corps Air Ground Combat Center Twentynine Palms, either. While kissing his wife, Arielis, Cpl. Rojas is holding his five-month-old son, Gabriel, for the first time.

From happy homecomings to tragic knocks on the door from military messengers, the far-reaching spectrum of war grips Americans on a daily basis. Due to a distracted media and largely disengaged public, however, it is relatively easy for citizens without personal connections to Afghanistan or Iraq to avoid boarding this emotional roller coaster. Yet I continue to believe that just like on September 11, 2001, we are all in this conflict together. Our nation's military families often experience periods of worry, grief, pride, and elation during deployments. Their fellow Americans should too. 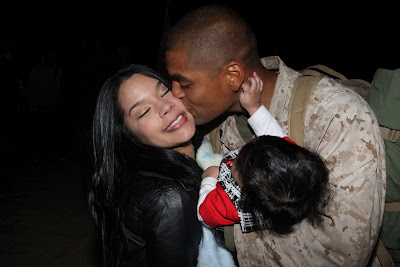