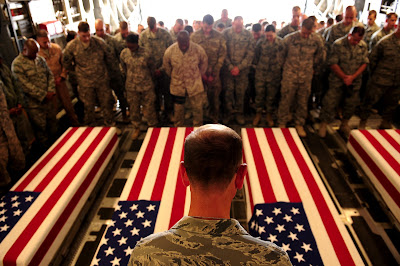 I can't imagine what it's like to wake up in a war zone. Many troops stationed in active combat theaters open their eyes each morning to immediate danger, never knowing which awakening will be their last.

As Sunday dawned, U.S. troops in the Taliban-infested Zhari district of Kandahar province were manning their posts and preparing for patrols as terrorists packed a minivan full of explosives. After a suicide bomber rammed the vehicle into a new military facility, six American warriors were taken from their families, friends, and fellow troops. According to The Washington Post, the Taliban has claimed responsiblity for the shameful terrorist attack on the farm village.

As much of America grumbled about blizzard conditions and freezing cold over the weekend, tragedy marked the early stages of winter in southern Afghanistan. Now, six American families will receive knocks on their doors, and solemn dignified transfer ceremonies, like the dramatic November 30 memorial pictured above, will be held by the military. The pain these service members, friends, and families will experience is overwhelming, and American citizens on the homefront should share in their grief.

Terrorism against our nation will not stand. No matter which political party is in charge, the U.S. military stands ready to strike back when we are attacked. That's exactly what's happening at this very moment in Kandahar province, and our thoughts and prayers are with the men and women standing up for the cause of freedom. To the families of the fallen, Monday morning marks a new dawn. We will never forget what your loved ones sacrificed in Afghanistan, so their fellow Americans could wake up covered by the blanket of freedom.