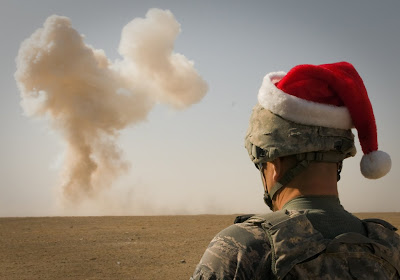 On Tuesday, I had the honor of interviewing Maj. Gen. David Blackledge, Commanding General of U.S. Army Civil Affairs and Psychological Operations Command, for an upcoming Creators Syndicate column. While I can't wait to share more with you about this fine leader's incredible 35-year military journey, Maj. Gen. Blackledge said something about the holiday season that I think is important to highlight during Christmas week.

"I’ve got over 1,100 soldiers deployed right now who aren’t spending the holidays with their families," Maj. Gen. Blackledge said. "I've gone several Christmases in a row before, and you also miss birthdays and anniversaries."

For those of us who haven't served in the military, not spending special days with our loved ones is something that's difficult to imagine.

"It's hard to describe to people who don’t experience that," the general explained. "It's those special events like holidays where family is so important. It really affects you. And you’ve got to really hand it to our great Soldiers and all our great military members."

As I have written on this blog since leaving the national media, the vast majority of American journalists continue to fail their country by neglecting to give sufficient ink, airtime, and web space to the wars in Afghanistan and Iraq. Judging by discussions I've had with journalists about this topic over the years, many reporters, producers, and news executives would likely respond by saying that it isn't their job to aid the United States during wartime. If that had been the overriding press sentiment during World War II, one could argue that defeating the brutal axis regimes in Europe and the Pacific would have been an even more colossal task for allied forces.

According to the Project For Excellence In Journalism, which is part of the non-partisan Pew Research Center, the war in Afghanistan received only five percent of news coverage during the week of December 13-19. That period includes December 14, when the nation learned the identities of six American heroes killed in a Kandahar province, Afghanistan terrorist attack.

During the previous week, which included the December 12 suicide bombing, two proud volunteer warriors, Lance Cpl. Michael Geary and Pfc. Dustin Finch, were killed on December 8 in Afghanistan and Iraq, respectively. Despite numerous events of significance, which were closely followed on this site and many other military blogs, Afghanistan coverage was even more scant during the week of December 6-12, getting only four percent of what PEJ calls "the news hole." Coverage levels of the war in Iraq did not even register in the weekly study.

The national press finds plenty of time to hype royal weddings and overanalyze celebrity mishaps, often using the drive for ratings as an excuse. While issues like the economy and health care impact millions of people and deserve ongoing attention, stories that received comparable coverage to the war in Afghanistan during this two-week span include the Elizabeth Smart case, WikiLeaks, and the deaths of longtime diplomat Richard Holbrooke and cancer-stricken political wife Elizabeth Edwards. Regardless of your political beliefs, it is clear that Ambassador Holbrooke and Mrs. Edwards were courageous individuals who did a lot of good in the world. Their deaths deserved attention and mourning, but so did the deaths of these valiant aforementioned American troops in Afghanistan and Iraq.

I can't count how many holidays I spent working inside newsrooms over an eight-year span. Yet as a general reminded me yesterday, that doesn't compare to spending Christmas in a war zone. While there are still isolated examples of strong American war reporting, like a CNN special called 'A Soldier's Story' that aired over the weekend, the continuing lack of consistent focus on these post-9/11 conflicts by the national media is an insult to thousands of American troops spending the holidays apart from their loved ones.

The men and women of the U.S. military repeatedly risk their lives to preserve Constitutional principles like freedom of the press. The men and women of the national media can afford to risk a Nielsen ratings point to illustrate the breadth of sacrifice being displayed every day by our fellow countrymen. For a media industry that often revels in the failures of politicians, celebrities, and sports figures, it's time to look in the mirror.