'One of the best' 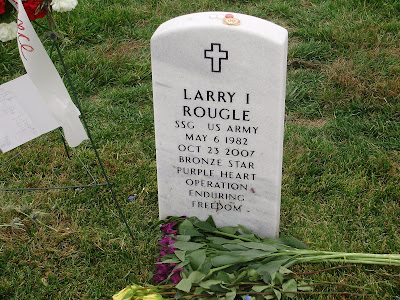 'Restrepo,' the acclaimed documentary by filmmaker Tim Hetherington and War author Sebastian Junger, is full of indelible images and piercing sounds. After watching the film for the first time on Thursday evening, there is one particular scene, which I woke up in the middle of the night thinking about, that genuinely shook me. It is the tragic footage shot just moments after the death of Staff Sgt. Larry Rougle.

If I am affected so deeply by these images as a viewer, I can't imagine how the men who were actually in Afghanistan's Korengal Valley on October 23, 2007, are feeling three years later. A visceral window of pain will open as you watch Sgt. John Clinard react in disbelief upon learning that his brother in arms was hit by enemy fire. The moment, while gut-wrenching, is also a crucial eye-opener for civilians like me, who haven't experienced combat. More than 4,500 Americans have been killed in action since the 9/11 attacks, and in almost every instance, a fellow service member goes through the crushing onslaught of emotions that Sgt. Clinard tragically experienced.

I didn't know who Staff Sgt. Larry Rougle was when I visited Arlington National Cemetery on October 26, 2010, just over three years since the tragic 'Restrepo' footage was captured. Flowers had been laid at the base of his headstone, and a stand holding cards and more flowers were displayed on the left. Today, just hours after watching 'Restrepo,' I am thankful to have been guided to this warrior's final resting spot to pay my respects, even though I wasn't aware of his story at the time. 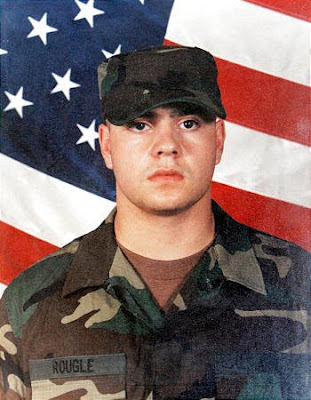 Staff Sgt. Rougle, 25, was on his sixth -- yes, sixth -- combat deployment when he lost his life. According to an October 2007 Salt Lake Tribune article, archived on the Arlington National Cemetery website, the Army paratrooper knew he probably wouldn't return to West Jordan, Utah, from Afghanistan's Korengal Valley, but believed it was his duty to deploy.

In 'Restrepo,' which will be released on DVD December 7, fellow soldiers make clear that the loss of this battle-hardened professional, who also served with honor in Iraq, was absolutely devastating to the 2nd Battalion, 503rd Airborne Infantry Regiment, 173rd Airborne Brigade Combat Team.

"He was one of the best, if not the best," Staff Sgt. Kevin Rice told Hetherington and Junger in the film. "I think that's what was tough for a lot of people, was kind of knowing in the back of your mind 'well if the best guy we have out here just got killed, where's that put me? What's going to happen to me, you know? What's going to happen to the guys on my left and my right?'"

On November 2, 2007, fellow soldiers gathered to honor Rougle, along with Sgt. Joshua Brennan and Spc. Hugo Mendoza. Sgt. Brennan and Spc. Mendoza, killed two days after Staff Sgt. Rougle, were casualties of the same battle for which Staff Sgt. Salvatore Giunta was awarded the Medal of Honor on Tuesday. The national media was certainly not focused on Afghanistan at the time, yet NPR, to its credit, covered the emotional service. Staff Sgt. Michael Gabel delivered a stirring eulogy for Rougle, and resolved to continue fighting in honor of his friend.

The documentary is titled 'Restrepo' because of Pfc. Juan Restrepo, a heroic combat medic who was killed in action on July 22, 2007. The tragedy also deeply affected the 173rd Airborne Brigade Combat Team, which braved enemy attacks to build Firebase Restrepo, an outpost crucial to troops in the unforgiving eastern Afghan valley before U.S. forces were withdrawn. Hetherington and Junger's film, which deserves to be nominated for an Academy Award, is a testament to the sacrifices of this incredible group of soldiers, living and fallen, who endured months of hell in one of the most dangerous places on earth. As America learned this week while honoring Staff Sgt. Giunta, and as we see in the documentary, the volunteer warriors who returned from the Korengal Valley live with harrowing sights and sounds that will never fade.

"Not a day goes by that I don't think about you or that day," a fellow soldier wrote to Staff Sgt. Rougle on the card displayed below, which I photographed at Arlington. "Rest in peace."

Thanks to 'Restrepo,' which I urge all readers of The Unknown Soldiers to watch, I will think of Staff Sgt. Larry Rougle and his brothers in arms every time I write about a fallen hero. This film, as well as Staff Sgt. Salvatore Giunta's Medal of Honor, ensures that the story of these paratroopers will teach future generations about the true meaning of bravery, service, camaraderie, and friendship. 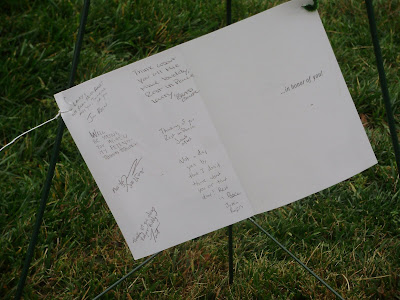