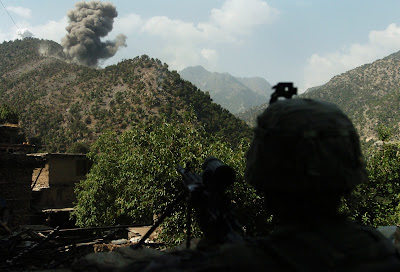 Even though I walk through the valley of the shadow of death, I will fear no evil, for you are with me.

Death and evil were all around Staff Sgt. Salvatore Giunta on October 25, 2007, in Afghanistan's perilous Korengal Valley. I don't know if the nation's newest Medal of Honor recipient is a religious man, but Psalm 23 came to my mind while thinking about his incredible story over the last few weeks. Aside from the parallels in prose, the verse was quoted by President George W. Bush in the Oval Office on the evening of September 11, 2001. On that night, the fires ignited by terrorists in New York, Virginia, and Pennsylvania still burned, and America was 26 days away from going to war in Afghanistan.

On November 16, 2010, President Barack Obama called our attention to this dark, remote eastern Afghanistan valley from the East Room of the White House. With Staff Sgt. Giunta at his side, the commander-in-chief described a setting few of us will ever experience.

"The moon was full, the light it cast was enough to travel by without using their night vision goggles," the president said. "With heavy gear on their backs and air support overhead, they made their way single file down a rocky ridge crest, along terrain so steep that sliding was sometimes easier than walking."

"When the third [soldier] was struck in the helmet and fell to the ground, Sal charged headlong into the wall of bullets to pull him to safety behind little cover there was," President Obama explained. "As he did, Sal was hit twice, one round slamming into his body armor, the other shattering a weapon slung across his back. They were pinned down, and two wounded Americans still lay up ahead."

Giunta and his fellow troops began throwing grenades and shooting, pushing forward to one of their five wounded comrades. As another soldier tended to the injured service member's wounds, the 22-year-old Iowa soldier proceeded further inside the moonlit valley on his own, looking for the enemy and fellow troops through the unknown of night. He saw the shadow of death and the faces of evil in those moments, as two terrorists carried his dear friend, Sgt. Joshua Brennan, into the darkness.

"Sal never broke stride," the commander-in-chief told a White House audience that included fellow troops from his unit, several Medal of Honor winners, Joint Chiefs Chairman Adm. Mike Mullen, and the Giunta family. "He leapt forward, he took aim, he killed one of the insurgents and wounded the other, who ran off. Sal found his friend alive, but badly wounded. Sal had saved him from the enemy, now he had to try to save his life."

Despite Staff Sgt. Giunta's incredible efforts to stop his good buddy's bleeding, Sgt. Brennan died the following day in surgery. Nothing could bring his friend back to life, but Giunta forever brought his friend back from the evil grasp of fear, hate, and terror. Instead of dying in a cave or having the images of his final moments paraded across al Qaeda and Taliban propaganda websites, Brennan died surrounded by fellow American troops, and was buried with full military honors by his loving family.

The ceremony's most moving moment came when President Obama and Staff Sgt. Giunta looked to the audience and paid tribute to the parents of Sgt. Brennan and Spc. Mendoza.

"There are no words that even three years later that can ease the ache in your hearts or repay the debt that America owes to you," the president said in earnest. "But on behalf of a grateful nation, let me express profound thanks to your sons' service and their sacrifice."

Someday, I would like to ask Staff Sgt. Giunta what was going through his mind when the camera panned back to him during this touching moment. I cannot imagine having to live with images and sounds of that valley, nor could I imagine watching my best friend in so much pain. Giunta, who was on his second tour in Afghanistan when his unit was ambushed, reminds us that caring for our veterans after battle must be a top national priority, and attention to daily events in Iraq and Afghanistan cannot continue to waver as it has in recent years.

In a ceremony filled with salutes, tears, applause, and pride, there was a lighthearted moment in the beginning.

"I really like this guy," President Obama quipped, which was immediately followed by laughter and loud clapping. Staff Sgt. Giunta offered his widest smile of the unforgettable ceremony, which ended about 30 minutes later when the soldier, wearing the majestic Medal of Honor, embraced his commander-in-chief.

Even though we've never met, I really like Staff Sgt. Giunta too. While he wasn't thinking about it at the time and still insists that his actions were ordinary, he did an extraordinary thing by charging into that valley. Sgt. Joshua Brennan's family will be forever grateful, and so will the families of 9/11 victims, who understand the pain of losing a son, daughter, husband, or wife at the hands of terrorists.

When my daughter someday asks me about what happened in the years after September 11, 2001, I will not start talking about about Bush, Obama, airport security, suspicious packages, or bin Laden. I will tell her about the valley of the shadow of death and the American soldier who feared no evil. The story told today at the White House is one we must pass on to future generations, to give them hope should they ever be called upon to fight. Even in these troubled times, America still has something -- and someone -- to be proud of. 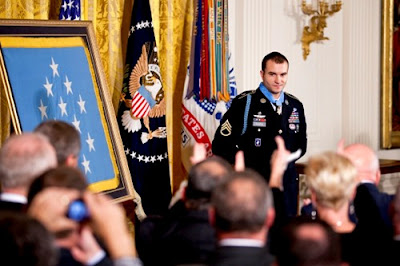