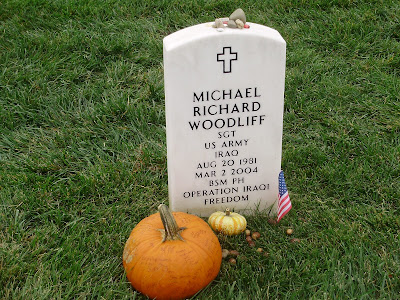 For the loved ones of Sgt. Michael Woodliff, something was missing this Halloween. While walking through Section 60 of Arlington National Cemetery last week, I noticed two pumpkins resting by this fallen warrior's grave, along with tribute stones and an American flag. Just by looking at the mementos at his grave, it was clear that six and a half years after his death, many people miss Sgt. Woodliff just as much as the day he left for Iraq. I immediately wanted to go beyond the headstone and learn more about this soldier's life.

Perhaps Halloween is special to some who knew Woodliff because he used to dress up as his favorite childhood characters to entertain others. A touching 2007 Herald-Tribune article by Thomas Becnel mentions a teenage Woodliff posing as Rocky and Vanilla Ice to make his friends laugh in school. It also tells a story of a young Michael taking a magic marker to his face, just to make his mom laugh during a drive through Florida.

Loved ones filled the pumpkin they left at Arlington National Cemetery with Halloween messages. 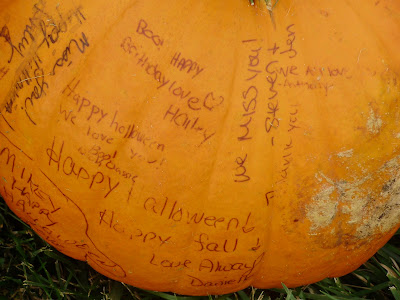 So who was this 22-year-old man who made everyone around him laugh? On the homefront, he was a prankster who loved to have fun, but also had a powerful inner drive to serve his country. He was deeply in love with his fiancee, Crystal, with whom he was making wedding plans.

On the battlefield, he was like a piece of iron, nicknamed "Iron Mike" by fellow soldiers, in fact. He also had a penchant for luck. According to a 2004 article in the same newspaper, a screaming suicide bomber ran straight at Woodliff and his fellow troops in 2003, and almost certainly would have killed them if the bomb hadn't malfunctioned.

Sgt. Woodliff escaped several other close calls before March 2, 2004. On that tragic day in Baghdad, an improvised explosive device struck the soldier's convoy, leaving him with catastrophic injuries. Woodliff passed away at a nearby medical facility later in the day, devastating friends, family members, and fellow troops from Iraq, to Friedberg, Germany (where the Headquarters and Headquarters Company, 1st Battalion, 37th Armor Regiment, 1st Armored Division is based), all the way home to Port Charlotte, Florida.

I didn't know this soldier's story when I bowed my head at his grave. Yet I was comforted when I read that the Woodliffs believe Arlington National Cemetery is the right place for their hero to be buried.

Sgt. Michael Woodliff was there for us on that fateful spring day in 2004, when he put his life on the line and fought hard for our country. As evidenced by a pumpkin full of moving messages, many were there for him on Halloween 2010. 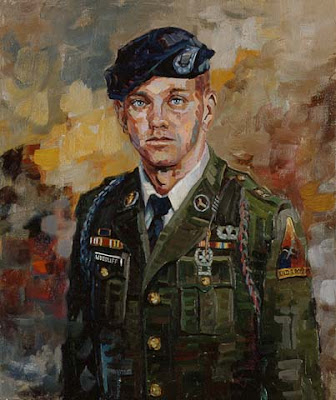