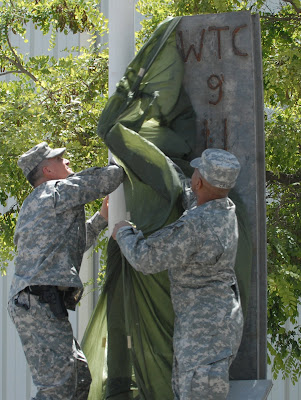 In National Cemeteries around the nation and cities large and small, millions of patriots turned out to remember the departed warriors who have paid the ultimate price for the gift of freedom. While every Memorial Day ceremony is special, one of the day's most poignant moments occurred thousands of miles from our shores.

At Bagram Air Field in Afghanistan, Maj. Gen. Curtis Scaparrotti, left, and Command Sgt. Maj. Thomas Capel, right, unveiled a beam from the World Trade Center in New York. The 950-pound symbol of the war on terrorism was donated to the military by Sons and Daughters of America, Breezy Point, New York. Under the hot sun, troops were told that the beam would remain standing at Bagram until President Obama or a future commander-in-chief declared the military's post-9/11 mission in Afghanistan complete.

As Gen. Stanley McChrystal reminded servicemembers at the ceremony, Memorial Day is ultimately about people. While we appropriately remember heroes from the battlefield throughout this emotional day, learning about the unique tribute at Bagram reminded me of the 55 military casualties suffered in the first moments on the war on terror. On September 11, 2001, Lt. Gen. Tim Maude became the most senior Army officer killed by the enemy since World War II when terrorists crashed American Airlines Flight 77 into the Pentagon. His 35 years of military service were saluted as recently as Thursday, when the Lt. Gen. Tim J. Maude Building opened at Kentucky's Fort Knox.

Some of the brave servicemembers serving in Afghanistan were ten years old on September 11, 2001. One thousand Americans have since been tragically killed in the country where the senseless murders of 2,973 innocent people were planned. From Memorial Day 2010 until the moment al Qaeda and the Taliban are defeated, a beam that once supported the World Trade Center will remind younger troops why this war had to be fought.

The Unknown Soldiers looks forward to posting about the beam's arrival at North Carolina's Fort Bragg. When the gigantic piece of steel has reached its final destination, we will know the war in Afghanistan has been won by an exceptional generation of volunteer warriors.
Posted by Tom Sileo at 8:12 PM