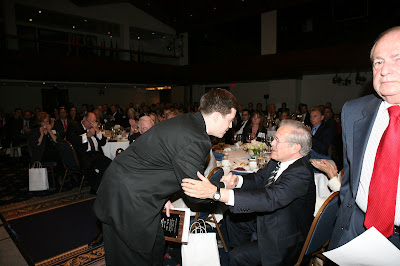 On May 11, I accepted a 2010 Robert Novak Journalism Fellowship for The Unknown Soldiers: How the Media Celebrates American Idols and Ignores American Heroes. Several elements of the project will be completed right here on The Unknown Soldiers, which will continue to tell the personal stories of our men and women in uniform. All too often, these extraordinary Americans are brushed aside by a ratings-driven national media that has become obsessed with celebrity flavors of the month.

During my acceptance remarks at the National Press Club in Washington, D.C., I talked about the sacrifice of Maj. Megan McClung, the highest-ranking female Marine to lose her life in the Iraq war. She was killed in action on December 6, 2006, alongside Army Capt. Travis Patriquin and Spc. Vincent Pomante in Al Anbar province.

Since visiting Maj. McClung's grave at Arlington National Cemetery in January, this fallen Marine and her parents have always been in my heart. The moving words on her headstone, "Be Bold, Be Brief, Be Gone," have kept me focused during some difficult personal moments after deciding to leave CNN and launch this website. In short, warriors like Megan are the very reason why this blog exists.

I had the honor and privilege of telling this Marine's heroic story to former Defense Secretary Donald Rumsfeld, who was seated at the head table in front of me as I delivered an acceptance speech. As this site's readers know, The Unknown Soldiers puts our troops, who are ordered to carry out missions specified by the commander-in-chief, far above politics. Putting partisanship aside, being able to make sure the man who led the Pentagon during the first years of the wars in Afghanistan and Iraq knew about Maj. McClung's sacrifice was a special moment that I cherish. Secretary Rumsfeld listened intently to all eight Fellowship speeches, especially the three that dealt with military issues, and kindly wished me well after I left the podium.

As I said to the audience, I think the words Maj. Megan McClung lived during her 34 consequential years can inspire us all. "Be bold, Be Brief, Be Gone." Instead of embedding my speech below, I will link to it here. There is a much more important video, courtesy of MultiNational Force-West Public Affairs Office, that needs to serve as this post's humble conclusion. Rest in peace, brave Marine, and thank you for serving our nation with such bravery and distinction.