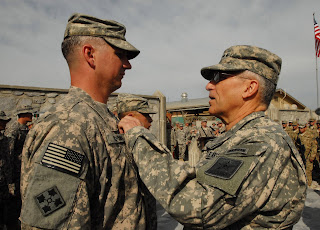 During an intense firefight in mid-July, Sgt. 1st Class James Goodin repeatedly put his life on the line without hesitation. As U.S. forces fought hard while trying to apprehend a wanted Taliban leader, the soldier noticed two fellow troops in harm's way. With almost no regard to his personal safety, he helped his injured brothers in arms.

For his actions during the battle, which included volunteering to hold a dangerous position during an ambush by terrorist fighters, Sgt, 1st Class Goodin was awarded the Silver Star by Gen. George Casey on Friday. Pictured above is the Chief of Staff of the Army pinning the third-highest military decoration on the brave soldier's uniform in Afghanistan's Nangarhar province. Back in Hays, Kansas, where Goodin hails from, there are undoubtedly some very proud relatives, friends, and neighbors at this hour.

Gen. Casey also awarded Silver Stars to Spc. Keith Stickney of Salem, New Hampshire, and Sgt. Victor De La Cruz, from San Diego, California, for heroic actions during an October firefight in Kunar province. Both volunteer warriors made split-second tactical decisions that saved lives during an insurgent attack on Combat Outpost Keating. Even though the two men live thousands of miles apart at home, they came together in defense of freedom on that dangerous fall day.

While the latest rumor about Lindsay Lohan will often command extensive media coverage in the United States, the fortitude being displayed on a daily basis in Afghanistan and Iraq is mostly unnoticed. This needs to change, and consumers need to demand more of journalists who are entrusted with enormous responsibilities in our Constitution. Write letters to the editor, send in feedback forms on news websites, and vote with your remote.

If Britney Spears trips and falls on a sidewalk today, it will, without question, receive more media attention than a U.S. servicemember saving the lives of fellow troops or civilians in Afghanistan or Iraq. As Saturday evening's events in New York show us, Americans live under a constant shadow of terrorism. While the heroic New York Police Department officers who neutralized the Times Square car bomb volunteered to protect the homeland, these three Silver Star winners signed up to play on the offensive side of the ball overseas. Aren't sacrifices of the men and women standing guard over our post-9/11 nation a bit more important than the celebrity flavors of the week?