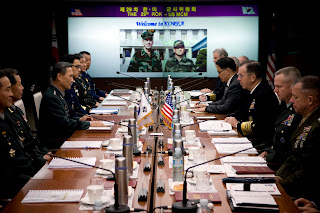 There are approximately 28,000 American troops stationed in South Korea. Today, our brave men and women are on a heightened state of alert after evidence proved that North Korea sunk a South Korean ship, killing 46 sailors.

"U.S. support for South Korea's defense is unequivocal, and the president has directed his military commanders to coordinate closely with their Republic of Korea counterparts to ensure readiness and to deter future aggression," White House Press Secretary Robert Gibbs said.

North Korea's communist dictator, Kim Jong-il, is believed to have personally ordered the torpedo attack. His government routinely issues insane statements threatening military strikes against any country that retaliates against its provocative actions, making the situation even more unpredictable.

Even with intense combat in Afghanistan and dangerous times in Iraq, the U.S. military remains the world's greatest fighting force, and stands ready to defend freedom against its oppressors. While we all hope the crisis on the Korean peninsula can be solved without more Americans having to lay down their lives on foreign soil, it is clear the United States will never back down to evil dictators like Kim Jong-il.