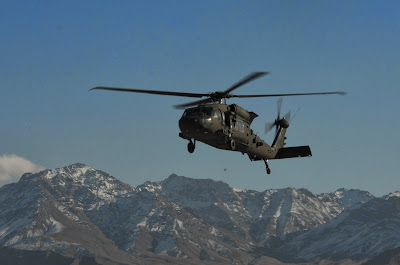 It's no secret that most Americans are ignoring the war in Afghanistan. Some simply don't care, while others aren't even aware that thousands of U.S. troops are still serving there.

If you fall in that category, the point of this column is not to chastise you. It's to give you six reasons to turn your attention back to a war that our brave men and women in uniform have been fighting since al-Qaida attacked our homeland on Sept. 11, 2001.

"He really loved it," CWO 2 Billings' uncle, Hurschel Billings, told the television station. "He couldn't wait to go back."

Chief Warrant Officer 2 Joshua Silverman, 35, of Scottsdale, Ariz., traveled to Israel as a teenager, according to the St. Louis Jewish Light. Before and during his first deployment to Afghanistan, he inspired those around him with his sense of humor and commitment to service.

"He was never concerned with what was cool," Matthew Litwack, a friend of CWO 2 Silverman, told the newspaper's editor, Ellen Futterman. "He did his own thing, and people gravitated around him."

The impact of losing Sgt. Chris Bohler, 29, of Willow Spring, N.C., can be felt by reading a two-sentence Facebook post by his mother, Deborah Bohler, on Dec. 18.

"At 5:30 this morning my heart shattered into a million pieces," she wrote. "Dear God give us strength to get through this pain."

According to Thomasi McDonald of the News & Observer in Raleigh, N.C., Sgt. Bohler preserved a family legacy of military service that goes back to his great-grandfather's European combat tour in World War I.

"News like this brings it all home," Wake County, N.C., District Attorney Colon Willoughby told the newspaper. "Especially when it's someone close to us."

Staff Sgt. Jesse Williams, 30, of Elkhart, Ind., last saw his six-year-old daughter, Madison, when he deployed to Afghanistan on Father's Day, according to WSBT-TV in Mishawaka, Ind.

"He lived for Madison," Staff Sgt. Williams' grieving mother, Debbie Passerallo, told the television station. "She was his little princess and she knew it."

Spc. Terry Gordon, 22, of Shubuta, Miss., graduated from high school in 2011. According to The Meridian Star, his former school and the surrounding community are in mourning.

"He was a great kid," Michael McDonald, principal of Quitman High School, told Brian Livingston. "His leadership and confidence was clearly evident."

To some, these cities and towns may seem like faraway places. With the war in Iraq over and the war in Afghanistan in its 13th year, you might think the days of being impacted by a post-9/11 conflict have long since passed.

The sixth soldier to die in the Dec. 17 helicopter crash was Sgt. 1st Class Omar Forde, 28, of Marietta, Ga., where I have lived for more than seven years. The soldier, who was stationed at Fort Riley with his wife and children, went to high school less than seven miles from my house.

According to Sgt. 1st Class Forde's high school football coach, who spoke to the Marietta Daily Journal, the future soldier was a picture of integrity, even in his teenage years.

"He had a lot of class on and off the field," Scott Jones told the newspaper.

The harsh reality of this ongoing conflict just struck my town, and, someday soon, it could impact yours. But the real reason every American should be paying close attention to Afghanistan lies within the six stories above.

As Fort Riley's commanding general reminded us in his statement honoring the six fallen heroes of the Dec. 17 crash, we owe our daily thoughts, prayers and appreciation not only to the warriors who bravely serve our country, but also to their courageous families.

"We stand ready to support them, and I urge our community and the nation, while remembering their sacrifices this holiday season, to do the same," Maj. Gen. Paul Funk II said. 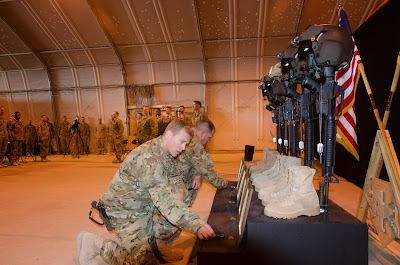 
Tom Sileo is a nationally syndicated columnist and author of BROTHERS FOREVER: The Enduring Bond Between a Marine and a Navy SEAL that Transcended Their Ultimate Sacrifice. Written with Col. Tom Manion (Ret.) and published by Da Capo Press, BROTHERS FOREVER will be released in May. To find out more about Tom Sileo, or to read features by other Creators Syndicate writers and cartoonists, visit the Creators website.
Posted by Tom Sileo at 10:00 AM