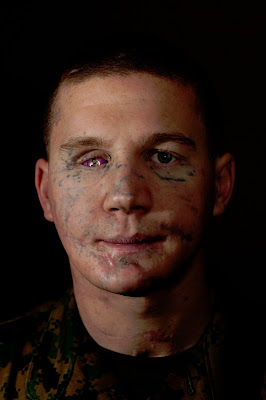 I was filled with pride during my entire phone conversation with Cpl. Kyle Carpenter. As an American citizen, it makes me enormously thankful that this 23-year-old Marine, who is being considered for the Medal of Honor, is willing to sacrifice so much for others.

Few have the courage to do what fellow Marines said Cpl. Carpenter did on Nov. 21, 2010, in Marjah, Afghanistan. When a grenade landed on the roof of a compound he was helping fortify, squad members said he dove on top of the explosive device to shield a fellow Marine.

"The grenade went off, and I woke up a month later," Carpenter told The Unknown Soldiers. "The next thing I really remember is seeing Christmas stockings on the wall."

Carpenter said he has no recollection of jumping on top of the grenade. But the Gilbert, S.C., Marine does recall the harrowing events leading up to the day he lost his right eye.

"Just imagine what it's like walking through mud and it being hard to lift your feet out, even if you don't have anything on your back," Carpenter said. "On most of my patrols, I would carry 800 rounds on my back — a lot of weight — and the weather is well over 100 degrees." 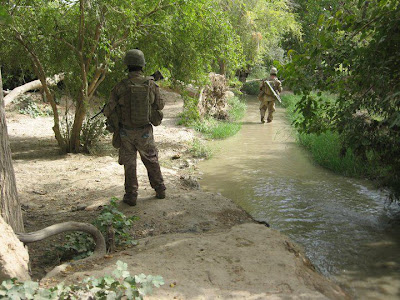 Carpenter is not seeking accolades or sympathy. He wants Americans to understand what thousands of U.S. troops still stationed in Afghanistan often go through.

"I didn't have a shower for three months," he said.

On Nov. 20, Carpenter and his 2nd Battalion, 9th Marine Regiment brothers in arms knew a confrontation with the Taliban was at hand. Carpenter's squad was ordered to transform a local home into an American compound, deep in the heart of a terrorist stronghold.

"It wasn't a matter of 'I wonder if we're going to get at shot at today?'" Carpenter said. "It was a matter of 'when was it going to start?'"

After trudging through a canal full of mud and sewage, carrying their weapons above their heads while sinking into the sludge beneath their feet, the Marines started building the makeshift U.S. base.

"As we were digging, we heard an extremely loud explosion," the Medal of Honor nominee said. "I turned around and another loud explosion went off in the same area."

Carpenter was shocked when he realized Taliban fighters were lobbing grenades, which were not the enemy's weapons of choice.

"We had never seen or heard grenades throughout our entire deployment," Carpenter said. "Needless to say, we were in disbelief."

Carpenter said at least two Marines were injured in the attack, which included enemy sniper fire. Once night fell, however, they resumed digging and stacking sandbags before a Taliban rocket tore into the roof, which partially collapsed.

"That was pretty much the end of Nov. 20," Carpenter said.

After grabbing a few hours of sleep, the young Marine awoke to a familiar sound.

"Like many mornings in Afghanistan, our alarm clock was AK-47 small arms fire," he said. 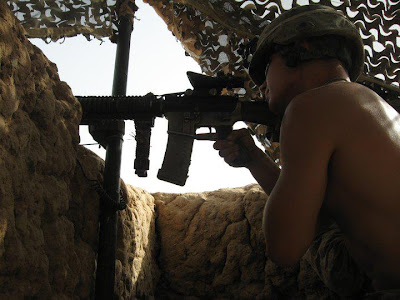 Carpenter and a fellow Marine were repairing the damaged roof when the fateful grenade landed nearby. Both young men were badly injured in the blast, which squad members said would have been deadly if it weren't for Carpenter's heroism.

"Everything is a blur because of the medication," he said. "It really was about a year before I started to have fluid memories."

As a Walter Reed patient in Bethesda, Md., Carpenter is still adjusting to missing an eye, wearing artificial teeth, and enduring countless surgeries to repair his jaw. His ears ring constantly, and nerve damage in his arms makes it difficult to button his shirt. But instead of wallowing in pain, Carpenter uses his story to inspire others.

"The best thing that's come out of it is the impact I've had on other people," he said.

If Cpl. Kyle Carpenter is ultimately awarded the nation's highest military honor by President Barack Obama, the young Marine plans to use an increased platform to motivate veterans and fellow wounded warriors.

"I will never stop helping people that need to be helped or trying to make a positive impact on people's lives," Carpenter said.

If this volunteer warrior's words don't leave you consumed with pride, I don't know what will. 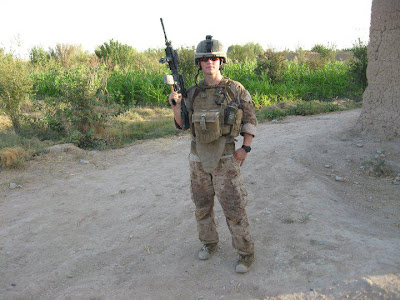 Note: To see the weekly "Unknown Soldiers" column in your local newspaper, please click here.
Posted by Tom Sileo at 10:47 AM