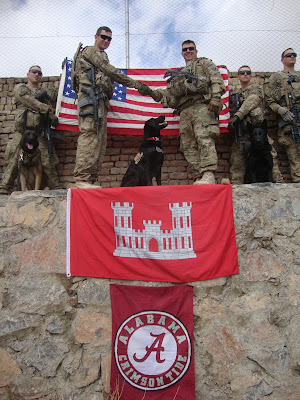 If you take a drive through the Deep South, you are virtually guaranteed to see numerous University of Alabama flags flying from houses and cars.

Yet few Crimson Tide flags hold the significance of the one Sgt. Jason Cartwright carries in the right cargo pocket of his U.S. Army uniform in Afghanistan. For the soldier, who arrived in the war zone over the summer with his trusted military working dog, the Alabama flag is a reminder of a close friend, U.S. Army Spc. Dusty "Doc" Parrish.

"If you knew Doc, no matter what kind of day, he would (put) a smile on your face," Sgt. Cartwright, 28, wrote to The Unknown Soldiers from Afghanistan. "Doc and I were roommates, both from Alabama, and both big Alabama fans."

While serving in Iraq with the Army's 5th Engineer Battalion, based out of Missouri's Fort Leonard Wood, Cartwright and his fellow soldiers held Parrish in the highest regard. 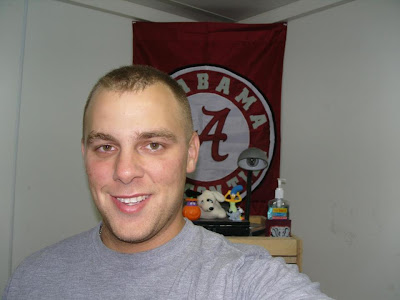 "We were in the same vehicle," Cartwright wrote. "I was his gunner and he was our medic."

On June 4, 2009, Spc. Parrish, 23, was killed in Balad, Iraq, when his vehicle was struck by an armor-piercing grenade. The loss of Parrish, who left behind a wife and son, devastated the soldier's hometown of Jasper, Ala., as well as Cartwright and his entire unit.

"We were real close friends to Doc," Cartwright wrote.

Nearing the end of his third combat deployment and the second hunting for roadside bombs with his dog, Cartwright carries not only the Alabama flag that once flew in the room he shared with Parrish, but also his fallen comrade's courageous spirit.

"(Through) all my deployments and being here in Afghanistan now, I still want to serve this great country," Cartwright wrote. 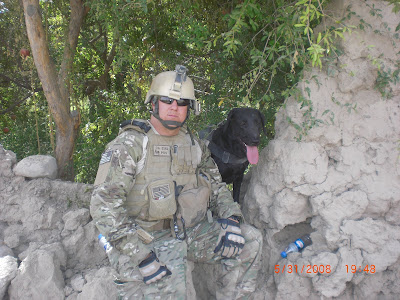 Ever since I connected with this soldier in June 2011, I have been astonished by how much he loves his country, his family and Isaac, the fearless dog that has helped save countless lives. Even after many months away from his wife and son and several near-death experiences with Isaac, Cartwright recently made the brave, selfless decision to re-enlist.

"So now I am dedicating six more years," he wrote.

When it was time for his re-enlistment ceremony in Afghanistan, Cartwright asked a friend and brother in arms, Army Lt. Jeremy Carroll, to administer the oath.

"We would have never thought in Iraq in 2008 doing route clearance patrols together that one day in Afghanistan, (Carroll) would be re-enlisting me," Cartwright wrote. 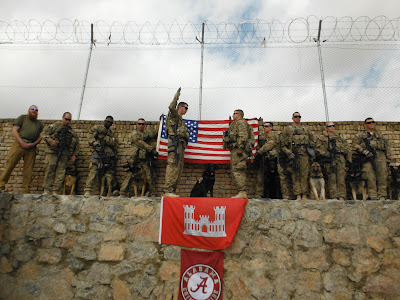 While spending time together before and after the ceremony, the deployed soldiers shared laughs about the "good ole days" serving together in Iraq. They also discussed the pain of losing their good friend in combat.

"Lieutenant Carroll, Isaac and I know today that Doc is watching over us here in this land as we continue (our) mission," Cartwright wrote.

In December, the senior Army dog handler, who is still serving with the 5th Engineer Battalion, explained what a given day is like for himself and Isaac, the friendly black Lab who helped locate 28 roadside bombs during their last combat tour.

"Isaac and I search for over 18 hours — 800 meters of routes and compounds to only get everybody back on that chopper to leave once the mission is complete," Cartwright wrote five months into his current deployment. "That is exactly what we have done together, out front taking point with all the troops behind us."

Cartwright and Isaac have helped locate roadside bombs buried near schools, hospitals and routes traveled by U.S. and Afghan troops. Many people are alive because this soldier and his dog are willing to repeatedly risk everything. Yet Cartwright always praises his fellow soldiers without assigning himself credit for his own gallant, unselfish actions.

Standing on top of a makeshift stone platform during his re-enlistment ceremony in Afghanistan, Sgt. Jason Cartwright raised his right hand with two of his best war buddies, Lt. Carroll and Isaac, by his side. Flying proudly from the platform was the University of Alabama Crimson Tide flag that honors his fallen friend.

"Thanks for serving, Dusty 'Doc' Parrish," the brave soldier wrote. 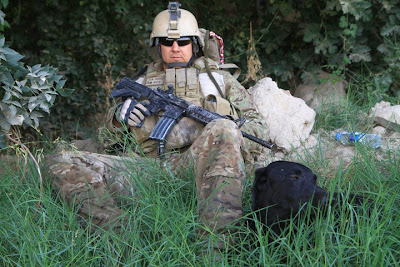