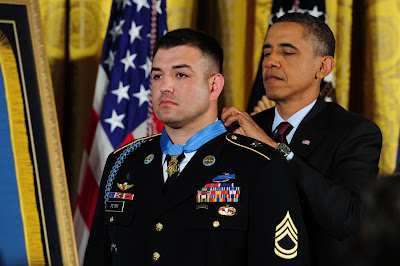 For Staff Sgt. Daniel Higgins, every day is a gift.

During a chaotic eastern Afghanistan firefight on May 26, 2008, Sgt. 1st Class Leroy Petry picked up an enemy grenade just as it was about to explode. The Army Ranger tossed it out of harm's way, losing his right hand in an act of heroism that spared Higgins and Pfc. Lucas Robinson. Petry was awarded the Medal of Honor by President Obama on July 12.

The day after he attended the emotional White House ceremony, I asked Higgins, who deployed three times each to Afghanistan and Iraq before leaving the Army, what it's like to walk around knowing someone saved your life.

"Robinson and I were actually talking about that (on the day of the ceremony)," the combat veteran replied. "We pretty much feel forever indebted to him, and that's not going to change. There's not going to be a hell of a lot of opportunity for us to pay him back," he added.

Sgt. 1st Class Jerod Staidle, a fellow Army Ranger who has deployed nine times to Afghanistan and thrice to Iraq, helped convey the enormity of what Petry, the second living Afghanistan war hero to receive the Medal of Honor, did for the men beside him.

"Staff Sgt. Higgins here, for instance, he went on to become a squad leader himself," Staidle said. "Just the impact that he made in the lives of his men below him is going to continue to echo throughout the platoon and the company.

"I'd like him to come back in the Army, but if he doesn't, whatever he does, he's going to continue to make an impact on people's lives," the battle-hardened warrior continued. "You just keep doing what you're doing, and that's how you pay it forward."

In his first news conference since the Medal of Honor ceremony, Petry, a 31-year-old wounded warrior with a wife and four children, displayed unflinching acceptance of the hand life has dealt him.

"At the end of the day, I didn't risk any more than any other service member over there," Petry said about his brothers and sisters in arms serving in Afghanistan. "There are people with bigger families and just as much in their lives, and they risk it every day."

One Army Ranger — 21-year-old Spc. Christopher Gathercole — made the ultimate sacrifice during the Paktia province battle. One of the most stirring moments of the White House ceremony honoring Petry, who has Gathercole's name engraved on a plaque bolted to his prosthetic hand, came when the commander in chief asked the fallen soldier's brother and grandma to stand.

"Gator — we called him Gator — meant everything to us," Higgins told The Unknown Soldiers. "When you spend as much time together as we all do, we were pretty much brothers, so losing him hurt like crazy."

"I really appreciated that the president did that," Staidle said. "I think I speak on behalf of everybody, from the people who knew (Gathercole) in that room ... who were probably holding back some tears, I'll be honest."

After an astonishing eight combat deployments and an act of bravery that will be remembered for generations, nobody would have blinked had Petry opted to retire from the Army. Yet in his most selfless act since tossing aside an exploding grenade, the wounded hero re-enlisted, pledging to use his higher profile to lend a hand to fellow troops and veterans.

"It represents those who paid the ultimate sacrifice, and it gives me the opportunity to help those living today and still serving our great nation and those who have served before," Petry said.

As he attends college in South Carolina, Higgins often reflects on the gift he was given by his fellow Ranger.

"I think about Petry because I know that Robinson and I wouldn't be here if Sgt 1st Class Petry hadn't done what he did," he said. "But it doesn't surprise us that he did it. That's the kind of guy he is."