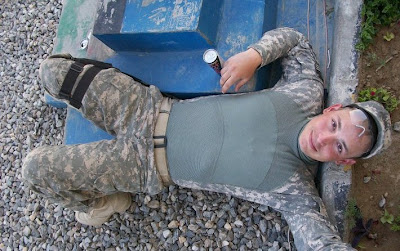 When I started a difficult phone conversation with the widow of Sgt. Christopher Bell, the voice of the couple's 1-year-old daughter, Lana, filled the background. While the child is too young to understand that her daddy was killed last month in Afghanistan, she senses that a bond has been broken.

"She can tell something's going on," Samantha Bell told The Unknown Soldiers.

When Sgt. Bell deployed overseas, his wife was left behind in Alaska, where the soldier was based, to care for their little girl. With most of their relatives residing far away in Alabama and Mississippi, Samantha needed her husband. But from the beginning, she knew his country needed him, too.

"It was hard," she said. "We tried to stay hooked in as much as we could."

While being separated by thousands of miles is incredibly difficult for any couple, nothing was more important to Samantha — or Christopher — than making sure the father could still hear his little girl's voice.

"I would keep Lana up real late at night so he could talk to her," Samantha told The Unknown Soldiers. "He didn't get to really talk to her as much as I would like, but when he did, it was something."

With a penchant for service, Christopher talked about joining the military or the police since the day he and Samantha met while working on a school project. When considering his options a few years later, joining the Army as a military police officer seemed like the perfect fit.

"He wanted to make a difference and make a change," Samantha, 25, said. "He was all about making a good life for himself and his family."

Bell threw himself into his job, exhaustively studying protocol and reciting Army manuals. Despite being a relatively young soldier at age 21, he quickly became the 793rd Military Police Battalion's "go-to guy" when it came to doing things by the book.

"He knew his job, and he did it well, and tried to be the best," the soldier's wife said. "If someone was in the wrong when it came to any kind of military violation, he would set him or her straight."

Bell's combat deployment to the treacherous mountains of northeast Afghanistan was going relatively well until an improvised explosive device detonated in front of his vehicle on April 4. The attack injured several soldiers and shook up his entire unit. While he was "never the same" after the attack, according to his wife, Bell took it upon himself to make sure his fellow troops pressed forward.

"His platoon sergeant told me that Chris motivated him to motivate the other guys," Samantha explained. "I've heard a lot of people say he was their inspiration to keep going."

On June 4, Bell was killed alongside Sgt. Joshua Powell, 28, Spc. Robert Voakes, 21, and Sgt. Devin Snyder, 20. Amid the whirlwind of pain brought home by the tragic explosion, Samantha cites the opportunity to meet loved ones of her husband's fallen brothers and sisters in arms, including Sgt. Snyder's mother, as one of her most important steps forward.

Dineen Snyder, who flew to Alaska from New York to meet other relatives of the fallen at Fort Richardson, said she was overwhelmed by Samantha's strength. But even as the death of her own daughter sunk in, the grieving mother expressed genuine compassion and concern for little Lana.

"She's going to grow up and not know her dad except through stories," Snyder painfully lamented.

I asked Samantha what she plans on telling Lana about her father. She paused, put down the phone and began to sob. As I waited in agony for her response, feeling guilty for asking the question, the young widow gave a remarkable answer.

"I'll sit her down and tell her that her daddy was a hero," Samantha said. "He accomplished what he wanted to so that we could be taken care of.

"He loved her more than anything," she poignantly added. "He was the best father and husband I could ask for."

Shortly before our conversation concluded, Lana's voice again filled the background. With a mother this strong, Sgt. Christopher Bell can rest peacefully, knowing that his little girl will be OK. 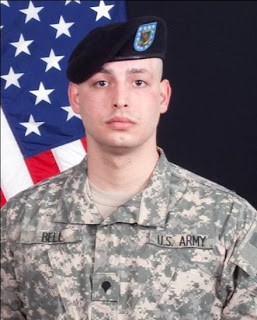