Three days after the tragic combat death of Pfc. Brian Backus in Afghanistan's Kandahar province, a Facebook tribute page was launched in the 21-year-old warrior's honor.

"I have never met this soldier," the page's unidentified creator wrote on June 21. "But I felt this page was needed for this fallen hero."

More than a thousand people have since "liked" the page, including many of the Harbor Beach, Mich., soldier's relatives, friends and fellow troops. People who hadn't seen Pfc. Backus in years have also been sharing fond memories.

"I used to babysit Brian and his brother," Lisa Bain posted on June 23. "We will always remember him as a smart, energetic boy who insisted on having his back scratched during bedtime."

The heartfelt messages of support are comforting the Backus family during a time of unrelenting grief.

"It means more to us than you can imagine," the fallen hero's grieving mother, Anne Backus, posted on June 22. "To see that our son, Brian, touched so many lives helps ease the pain of loss."

Facebook communities like this one harness the staggering toll of the ongoing Afghanistan and Iraq conflicts. As the national media obsess over next year's presidential election and the Casey Anthony trial, these posts, filled with genuine compassion and raw emotion, remind us that we are still a nation at war.

Another 21-year-old fallen hero, Pfc. Josue Ibarra, made the ultimate sacrifice while conducting combat operations in Afghanistan's Helmand province on June 19. In the dark hours following the tragedy, a Facebook page was quickly, caringly created to celebrate the Marine's life.

"You wanted to protect us; you did protect us," Dennis Ly wrote on June 23. "There's no way we can thank you in person now, but what we can do is live out the rest of our lives to the fullest and to the most positive way we can for Josue.

"He will live on through us, the people he wants to protect," he continued. "We won't let you down."

After coordinating on Facebook, Pfc. Ibarra's community didn't let him down. When the Marine returned to Midland, Texas, in a flag-draped casket, city streets were lined with patriotic supporters.

When an American service member is killed in action, fellow troops are deeply affected. Facebook pages like the one memorializing Pfc. Eric Soufrine, 20, of Woodbridge, Conn., give grieving warriors a place to pour out their hearts.

"As a soldier also raised in Connecticut just returning from Afghanistan, I'd like to thank you for your service, and for making the ultimate sacrifice," Tara LaDore posted on June 17. "Though I've never met you, you are my brother in arms and you will never be forgotten."

Pfc. Soufrine, who died on June 14 in Afghanistan's Farah province when terrorists attacked his unit with an improvised explosive device, had a girlfriend who couldn't wait for him to come home. As war's harshest reality sinks in, the Facebook page is painful but also therapeutic for Paige Woodward.

"We were supposed to have such an amazing life together," she posted on June 16. "But I promise you, I will see you in heaven eventually, and we will pick up where we left off."

Pvt. Ryan Larson, 19, hailed from a tiny Wisconsin village called Friendship. Since his June 15 combat death in Afghanistan's Kandahar province, more than 2,000 people — nearly three times his town's population — have "liked" a Facebook page in tribute to their friend.

"To see men and women, old and young, rich and poor, all races, types, personalities, and positions in our community all as one yesterday for Ryan was so amazing," Izzy Jackson wrote on June 26. "God was shining his light down yesterday to welcome Ryan home."

During past conflicts, Americans could not instantly connect to wars being fought by our friends and neighbors, nor could families of the fallen visit virtual communities filled with memories of their loved ones. In the 21st century, through these interactive, invaluable tribute groups, parents can teach their children about the indelible sacrifices being made in Afghanistan and Iraq.

I never met these four fallen heroes. But today, thanks in part to four remarkable Facebook pages, they are dearly missed. 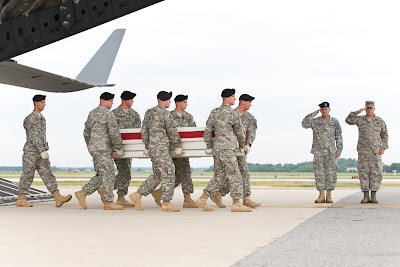