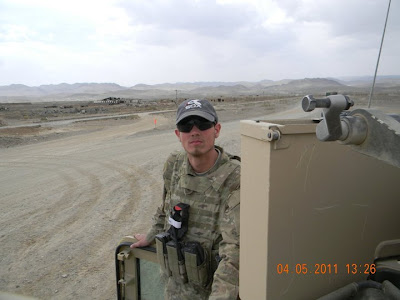 As he boarded a helicopter in a volatile war zone, Spc. Cody Tumey sent his mom a heartfelt text message:

Not worrying is impossible for this mother, especially as her son battles terrorists in Afghanistan's Paktika province, which has been called one of the most dangerous places in the world for an American. Yet for Crystal Tumey, the instinct to stand behind her son and his fellow troops overrides her worst fears.

"Our whole family tries to be the kind of supporters that Cody needs us to be through this, his first deployment," she said in an e-mail to The Unknown Soldiers.

Spc. Tumey's maternal grandmother, Dee Dover, said the most difficult part of the deployment for her daughter is the frustrating reality of sporadic communication. While the soldier always tries to warn his family when he expects to be out of contact during a mission, the waiting, wondering and worrying would wear on even the strongest military mom.

"She gets very anxious on that third day or fourth day," Dover said. "I tell her it's going to be OK, because every time it's the fourth day, he gets back and he calls."

As Tom Petty once wrote in his ode to the Hoosier State, Cody "grew up tall and (he) grew up right with them Indiana boys on them Indiana nights." While always good-natured, the future soldier struggled at times in high school and, according to his grandma, "bummed around" for about a year after graduation as he pondered life's next step.

"His paternal grandpa pointed him in the direction of the military," Crystal said. "Cody also had a great deal of respect for his maternal great-grandpa. Both of them were veterans, and they clearly had a big impact on him and his decision to join the Army."

As soon as basic training started, everything changed.

"The truth is, the Army has truly brought out the best in Cody," the soldier's mom explained. "Cody has become a young man with purpose, bravery and commitment."

The soldier's forward operating base recently withstood a "direct hit" by enemy fighters, an incident that greatly concerned Spc. Tumey's loved ones. When the soldier's dad, Chuck, asked his son about the attack, Cody had a simple response.

"The attempt happens every day here, Dad," the soldier said, according to his grandma. "It's not something isolated."

As day-to-day combat operations heat up during another volatile summer at war in Afghanistan and Iraq, patriotic Americans are praying for our troops, especially in small rural communities outside Indianapolis.

"We pray during the day, we pray at night, we pray every time we think about him," Dover said. "Cody has prayers beside him, over him and under him."

While faith sustains the soldier's family, the unknown is still terrifying.

"We have absolutely zero control over his safety," Cody's grandma said. "He has a job to do, and he's dependent on other soldiers to do their jobs right, too."

Awarded a leadership medal before he could legally be served a beer, the young specialist was serving with the Army's 1st Battalion, 16th Infantry Regiment, known as the "Iron Rangers," when he turned 21 years old on June 15.

"I wish we could be together to celebrate this milestone birthday," Crystal wrote on June 14. "But I know that he is where he wants to be right now."

As another dreaded fourth day without hearing from her son approached, the military mom was again comforted by her son's poignant words:

"This was my dream and my choice," Spc. Tumey's text message continued. "If something happens, don't ever forget that."