A Family of Value 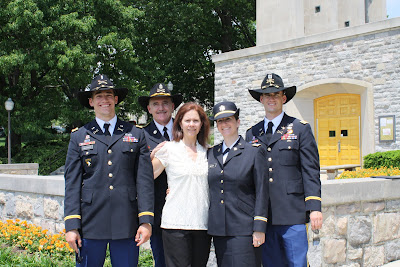 The scariest moment of Deb McEvoy's life came on Oct. 24, when her phone rang just after 9:30 a.m. On the other end of the line was a U.S. Army official, who said that her son had been wounded in Afghanistan.

"Which one?" the startled mother replied.

"That was an overwhelming weekend," Deb told The Unknown Soldiers about seeing both her sons leave for war.

Deb's mind wandered in a thousand different directions as she learned it was Connor who had been hit. Her son's Army vehicle had been struck by a rocket-propelled grenade on a mountain road, leaving him with "non-life-threatening" injuries but still serious enough to airlift the soldier out of a dangerous war zone.

After more than 24 hours, which seemed like "an eternity," Deb finally spoke to her son when he arrived in Germany. The platoon leader had sustained leg injuries that would require months of recovery and rehabilitation, but he would survive.

"Our family is so fortunate," she said. "Even though Connor was injured, we came out of it OK."

While having two sons deployed at the same time was "much different" than her initial experiences as a military family member, Deb, 50, had grown to understand the sacrifices of service. Her husband, 1st Sgt. Joe McEvoy, spent 21 years on active duty. While living on Kentucky's Fort Knox, Joe was given the chance to move to Texas' Fort Hood to train for his first combat deployment. Instead of going to Iraq, Joe, now 51, retired for the sake of his children.

"We wanted to give Riley the opportunity to stay stabilized and graduate without moving again," Deb explained.

As a good big brother, Riley, 26, was trying to figure out how to lift the spirits of Connor, 23, as he continued his recovery at Georgia's Fort Gordon. The Army captain helped arrange a special ceremony in the hospital, where Connor was promoted to his current rank of first lieutenant.

"I think they're doing fine," Deb said of her two sons. "They've changed — nobody can go over there and not come back a different person — but I think they're better men and better soldiers."

The youngest McEvoy is changing right before Deb and Joe's eyes as well. On May 13, the family descended on Blacksburg, Va., for the graduation of 2nd Lt. Erin McEvoy, 22, from Virginia Tech. The day before, she graduated from the Virginia Tech Corps of Cadets and was sworn into the Army by Connor, who had been read the oath by Riley two years earlier.

Now the proud father of three American soldiers, Joe gave his little girl her first salute. Erin, a military intelligence officer with the 1st Cavalry Division, will soon head to Fort Hood, where her father would have been stationed before a deployment to Iraq.

Through trial and tribulation, the scariest moment of Deb's life gave way to the proudest.

"It was probably the happiest day of my life," she said. "I say that because both my boys were home safe and my daughter finished her college career. We're all happy, we're all healthy."

Not a day goes by that Deb isn't thankful for her family's blessings.

"It breaks my heart to hear about families that aren't able to welcome their soldier home the way they had hoped to," the military spouse and mother said poignantly. "Our family is lucky, and I am very grateful."

America is lucky, as we should all feel grateful to live in the same country as even one family like the McEvoys, let alone 1 percent of our population, which volunteers to defend us. Their commitment to service is strong, substantial and quintessentially American. As members of this family of heroes salute one another, they salute the flag with astounding vigor.