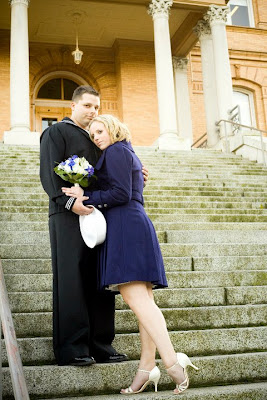 Just before U.S. Navy Hospital Corpsman Second Class Chris Paulson left for Afghanistan at the end of February, he had an unthinkable conversation with his new bride.

As HM2 Paulson provides medical care for U.S. Marines, Afghan soldiers and civilian bystanders during the volatile Helmand province fighting season, his wife waits nervously on the home front for the chance, someday, to live with her husband for the first time. Yet while every military spouse faces challenges, Hospitalman Samantha Paulson is a warrior, too.

"There's a chance I could be turning around and going on a deployment when he gets back," said HN Paulson, who is stationed at North Carolina's Camp Lejeune. "But I can't sit here and say 'woe is me,' either, because this is what we signed up for."

The Dec. 27, 2010, marriage of Chris and Samantha Paulson can be attributed, in part, to a sprained ankle she suffered during training. After treating her injury, Samantha's future husband invited her to a barbeque. The rest is history.

"We were going to try to wait and have the big, fancy wedding," she said. "But shortly after we started dating, his deployment papers came up."

This is Chris Paulson's third deployment to a war zone, after previously serving in Iraq and Afghanistan. According to his wife, he's never seen anything like this year's fighting in Helmand province.

"I'm inspired by him every day, and I hope one day I can be as talented and skilled as he is," she said. "He's very dedicated to treating his Marines and tries to stay focused on the mission as much as possible."

Despite her military training, Samantha has to limit how much she thinks about day-to-day operations in Afghanistan.

"If I started letting it get to me, I don't think I would ever stop crying," the sailor admitted. "You can't prepare yourself for the idea that your spouse might die."

Samantha's husband and the Marines he treats spend almost every day out on foot patrols. The risks they face are very real.

"In addition to the improvised explosive devices buried underneath them, (terrorists) are now putting IEDs in trees so they can blow up over a vehicle," Samantha said. "The enemy had been sitting there angry all winter, and now they're ready to fight."

Samantha said Chris recently pulled a bullet out of a civilian's leg and has probably treated more Afghans than Americans during his current deployment. But the tragic June 27 combat death of a Marine in his care, Cpl. Michael Nolen, 22, will likely haunt her husband for the rest of his days.

"This isn't the first Marine they've lost, and it won't be the last, unfortunately," the sailor said, her voice trembling. "Out there, all you have is your job. It's just one never-ending day."

Taking advantage of the resources available to her as an active duty sailor and military spouse, Samantha frequently visits chaplains and family readiness groups.

"I've definitely used these things because there have been days when, of course, I'm worried about him," she said. "I'm just as worried about his fellow Marines. I jump every time my phone rings," Samantha added.

When her husband returns in the fall, the couple will have a few days together before Chris heads to Naval Station Great Lakes in Lake County, Ill.

"We're going to try to spend as much time together as possible and meet up with some of the Marines he served with and their wives," Samantha said. "They're all hungry for real food, so I imagine a good steak is in order."

As HM2 Chris Paulson risks his life thousands of miles away, with even more time apart from his wife on the horizon, one would think HN Samantha Paulson would be full of despair. But like her husband, she took the Hospital Corpsman Pledge and won't let her country down.

"I'd do it all over again," she said. "This relationship and my job are that important to me."