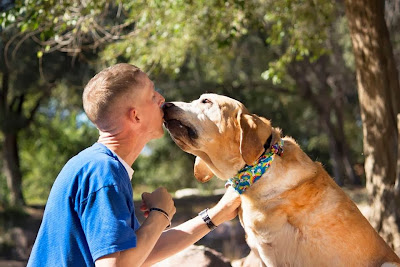 During four deployments to Afghanistan and Iraq, there was one constant for U.S. Army Sgt. Jason Van Loo. His loyal dog, Blu, was always at home with his wife and kids.

"He's been a big part of our family," said Sgt. Van Loo about his yellow Labrador retriever.

In December 2012, Jason was enduring his roughest combat tour since joining the military 13 years ago. After three deployments to Iraq, the soldier was dodging improvised explosive devices in Afghanistan with his Colorado-based unit.

"Everybody hears about Afghanistan and all the IEDs and stuff, and it pretty much lives up to that," Jason said. "It's the real deal over there."

On the deployment's first mission, Jason sensed something strange during a joint combat patrol.

"I thought I heard something and felt vibrations in the truck," he said. "Eventually, we figured out that no one could get a hold of the rear truck ... that's when we found out my buddy's truck had been hit."

Jason's buddy was Staff Sgt. Mark Schoonhoven, 38, of Plainwell, Mich. He suffered devastating injuries in the Dec. 15, 2012, enemy IED attack, and succumbed to his wounds on Jan. 20. Before Jason's deployment was over, four more teammates were killed in action, with another four wounded.

"We tried to get over our losses and keep our mission going," Jason, who was deeply affected by the tragedies, said.

In the early morning hours of July 3, Jason was the assistant gunner in his Army vehicle when his convoy encountered a road blocked by burning fuel tankers. As fellow soldiers tried to clear a path, there was a huge explosion.

"I don't recall a lot of it, but I do recall seeing black smoke and red and orange," Jason said.

His vehicle had been struck by an enemy rocket-propelled grenade, but miraculously, Jason and his entire patrol survived.

"I would say I had angels looking out for me and everyone else in the truck that day," he said.

As he dealt with the daily dangers of wartime service, Jason was shocked when his wife, Kari, informed him that their beloved dog, Blu, had been diagnosed with bone cancer. While some may have put the dog down, Kari was determined to ease Blu's pain and make sure the pet was reunited with her husband. 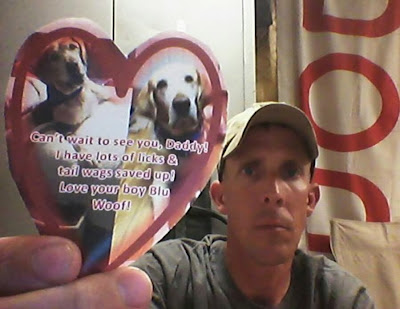 "It meant the world to me that my wife wouldn't take no for an answer," Jason said. "(Blu) was the one taking my spot while I was gone."

Blu's leg was amputated. The dog then started chemotherapy at Colorado State University, which Kari said "went above and beyond" to treat her sick pet. The community also rallied around the deployed soldier's wife and three kids to form "Team Blu Van Loo" and raise funds for the dog's expensive surgery and treatments.

"She just never gave up," Jason said about his wife. "She wanted to make sure Blu was there when I came home."

Sure enough, when Jason returned from his harrowing fourth deployment, Blu was waiting.

"I was so happy to see him," the soldier said. "I was so tired and exhausted, and he just knocked me over with his three legs and started licking me. It was awesome." 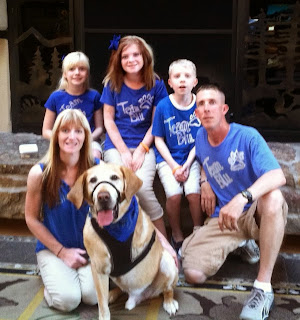 On Oct. 29 — Jason's 41st birthday — the medical staff at Colorado State University gave a hero's welcome to the soldier and his dog.

"That's what I wanted for my birthday," Jason said. "He had to get some blood tests and they had a big party for him."

Blu died just before Thanksgiving. While the soldier, his wife and their children are saddened by their pet's passing, Jason is forever grateful for the weeks he got to spend with the dog after coming home from Afghanistan.

"We donated all his organs to CSU so they can study and research (cancer)," Jason said. "Somebody paid it forward for me, so I want to pay it forward as well."

Sergeant Jason Van Loo has suffered great loss over the past year, but as he continues his Army career, he is determined to carry on with the memory of the fallen, including Blu, in his heart.

"He's still with us in spirit," Jason said.