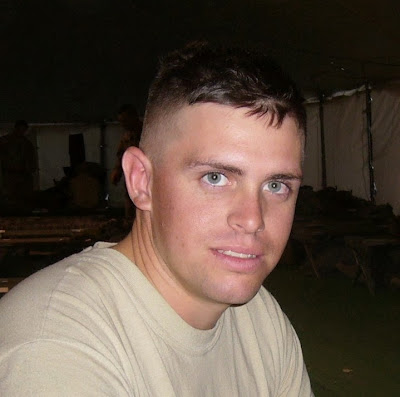 Ever since he was a boy growing up in West Texas, U.S. Army Spc. Robert "RJ" Volker wore his heart on his sleeve.

"He had a smile that was true from his heart," the soldier's mother, Melissa Volker, told The Unknown Soldiers via email. "You could tell how he felt by the size of his smile."

From a young age, it was obvious that RJ would one day put his heart and soul into serving his country.

"As far back as I can remember, he wanted to be an 'Army man,'" Melissa wrote. "He was doing that Army crawl thing (at) about 2 years old."

Throughout his freshman year in high school, RJ hounded his mom to sign a permission form that would grant him access to Army recruiters.

"I was afraid to sign because I thought if I did, the Army would take him as soon as he graduated," Melissa wrote about RJ, who would turn 18 in August 2003.

One Tuesday morning before school, Melissa gave in and signed the form. The date was Sept. 11, 2001. Hours later, RJ watched in silence as the Twin Towers fell and the Pentagon burned.

"He never said any more about joining up after that day," she wrote. "He got scared ... or so I thought."

In September 2005, RJ's younger brother, Johnathan, joined the U.S. Navy. As the fourth anniversary of the 9/11 attacks approached, RJ told his parents that he, too, would be volunteering to serve.

RJ explained that after 9/11, he felt an obligation to stay home and protect his family during uncertain times.

"I needed to stay," he said. "But if you're strong enough for (Johnathan) to go, I know I can go, and you and Dad will be fine."

Two weeks later, RJ left for boot camp. During the next year, he would get married and accomplish his lifelong dream of becoming a soldier. Then, in October 2006, Spc. Volker deployed to Iraq. 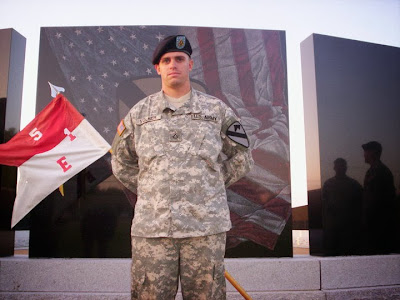 Almost every day, the young soldier would call his wife, Martha — who'd moved in with RJ's parents while he was away — and tell his family how much he loved them.

"As the days went by, I talked to him less and less (because) it was just so hard to think about the 'what ifs'," the soldier's mom wrote.

During one video call, RJ's camera began to shake as lights flickered in the background. When Melissa heard yelling, she realized her son's base was under attack.

"I sat there, glued to the computer, not sure what was happening and fearing the worst," she wrote. "He popped back up from under his table and said 'that was close ... you still with me, (Mom)?"

A few days before Christmas 2006, RJ's wife and mother were going through boxes of decorations when someone knocked on the door. Screams filled the house when they realized that two uniformed soldiers were waiting outside. The family's worst fears had come true.

"An IED exploded under the truck (RJ) was driving," Melissa wrote. "He took the (brunt of) the explosion by turning the truck away from it and saved the other men in his truck."

Specialist RJ Volker, who made the ultimate sacrifice in Baghdad on Dec. 20, 2006, at age 21, was escorted home to Texas and saluted by his 19-year-old brother. Melissa and her husband were in a fog as the heartbreaking scene unfolded.

"You just nod your heard and keep going," she wrote about the days after RJ's death.

After receiving letters from the president and governor, support from organizations like the Patriot Guard Riders and compassion from countless mourners, the fog began to lift.

"To know that our son's death was not in vain — that most of our nation appreciated the life he gave for them — is awesome," Melissa wrote.

Like all of our nation's Gold Star families, Spc. Robert "RJ" Volker's loved ones will never stop grieving. But whenever the past begins to haunt Melissa Volker, she thinks of her son's defining characteristic.

"RJ was just a good-hearted, hard-headed boy who heard a sound not too many people hear ... a call of duty," the soldier's mom wrote. "He had a soldier's heart." 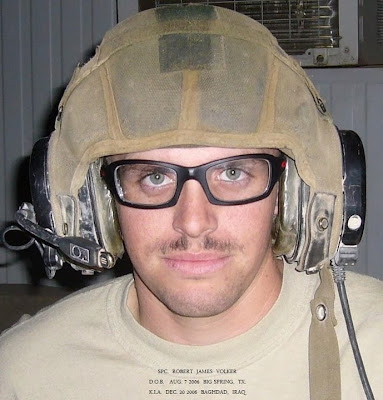 Note: Thank you to Notes With Wings for putting the Volkers and The Unknown Soldiers in touch.
Posted by Tom Sileo at 9:30 AM