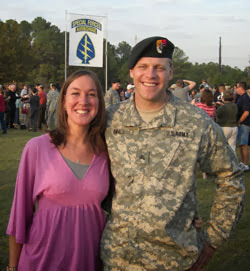 Before U.S. Army Staff Sgt. Marc Small left for a month of Special Operations training, he sent a gift to his fiancee, Amanda Charney.

"In the box ... there were 30 envelopes for every day he wouldn't be able to talk to me," Amanda told The Unknown Soldiers. "Every day he was gone, I would open up an envelope."

Marc and Amanda were immediately drawn to one another when they met on New Year's Eve in 2005.

"He would smile and others would start to smile," Amanda said. "(Marc) laughing was the number one thing that got me going."

Amanda had no previous connection to the military, which resulted in a challenging adjustment to life as a soldier's girlfriend. She lived outside of Philadelphia in Collingswood, N.J., while Marc, who was from nearby Collegeville, Pa., was stationed at North Carolina's Fort Bragg.

"I never made the formal move down there," she said. "We were just trying to make it through a lot of traveling, and it was difficult."

Despite the unavoidable tribulations of a long-distance relationship, Marc and Amanda emerged stronger than ever. The soldier asked the girl of his dreams to marry him, and when she said yes, Marc knew the only thing standing in the way was a six-month deployment to Afghanistan.

Once Marc came home, the couple decided, they would marry and open up their house to children with disabilities. Marc wanted to assist Amanda — a language pathologist — in giving a voice to the voiceless.

"He said I could work with children out of our home," Amanda said.

Instead of complaining about their dreams being put on hold, Marc — a Green Beret — trained hard and focused on his unit's difficult mission overseas.

"He was so committed and determined," Amanda said.

After spending Christmas 2008 in each other's arms, the soldier and his fiancee said goodbye. In six short months, they would be together forever. 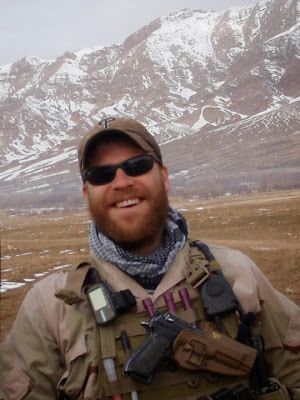 "We had our whole future planned," Amanda said.

Throughout January 2009, Amanda communicated with Marc using technological innovations that were difficult to imagine when the war in Afghanistan erupted back in 2001.

"Even when he was there, we would FaceTime and Skype," Amanda said.

When she asked Marc if he was OK, his response was almost always similar to what he told his fiancee before deploying: "Don't cry, I'll be back in no time."

"I'm sure he masked everything he saw so he wouldn't worry me," Amanda said.

On Feb. 12, 2009, Staff Sgt. Marc Small, 29, was killed when insurgents attacked his unit with rocket-propelled grenades and small arms fire, according to the Pentagon. For the valiant soldier's family and bride-to-be, life as they knew it was shattered in a matter of seconds.

"I didn't believe it at all," an emotional Amanda said. "It was a sadness and a shock that was just not real."

Instead of exchanging vows with the man she loved, Amanda watched in stunned silence as Marc's flag-draped casket returned to U.S. soil.

"All you saw were hundreds of children waving American flags," Amanda said. "It was a beautiful sight that I'll never forget."

As grief's dense fog began to clear, Amanda focused on making Marc's dream of helping children a reality. Putting her linguistic expertise in action, she launched a non-profit organization that helps children with language disorders communicate with one another. The charity's name — "Small Steps in Speech" — was Marc's idea.

"It's amazing that after four and a half years, we have distributed almost $300,000 to children around the country," Amanda said.

Amanda added that she never could have made it this far without the support of her fiance's grieving, equally determined relatives.

"I'm just so blessed to have continuing support from Marc's family," she said.

On Feb. 14, 2009, two days after her fiance's death, Amanda received another package in the mail. To her astonishment, it was a Valentine's Day gift from Marc.

"He planned this ahead of time before he left for Afghanistan," Amanda, now 34, said. "He had flowers delivered."

Nearly five years after tears of grief first filled Amanda Charney's eyes, the legacy of Staff Sgt. Marc Small endures. He placed the well-being of others above his own and gave his country a gift it can never repay. 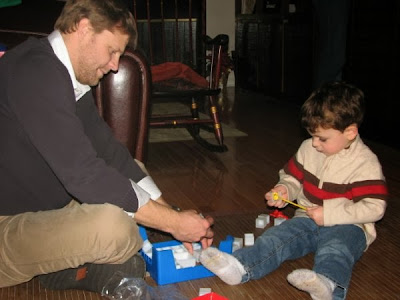