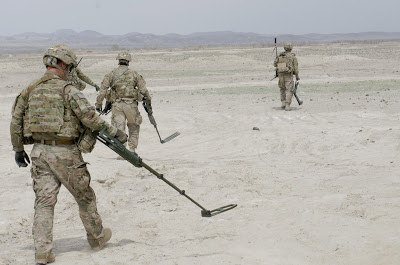 For many Americans, July 4th is a day to grill hot dogs and watch fireworks. For U.S. Army Spc. Logan Ellard and his tactical explosive detection dog, Thor, it's another day to search for roadside bombs.

"I enjoy it out here," Spc. Ellard, speaking to The Unknown Soldiers from eastern Afghanistan on June 22, said. "Most of the terrain we're around is in the mountains."

Stationed in Afghanistan's rugged Paktika Province, the 22-year-old Houston, Texas, soldier has quickly learned to appreciate the luxuries that far too many of us take for granted. During our phone call, Ellard repeatedly expressed gratitude for having air conditioning on his forward remote operating base (FOB).

The young soldier's upbeat, positive attitude is remarkable considering his daily responsibilities. As a tactical explosive detection dog handler, Ellard's job is to lead Thor into the mountains and make sure the ground beneath the boots of U.S. and Afghan troops is free of deadly bombs.

"There are many foothills and paths that haven't been cleared in a while," Ellard said.

Thor, a Belgian Malinois with an official rank of Sergeant, has been sniffing out enemy improvised explosive devices for four years. The dog's life-saving skills and friendly nature have endeared him to every soldier on the FOB.

"Everybody knows him and everybody loves seeing him," Ellard, who's been with Thor for eight months, said. "When I take him around, he brings the morale up of everyone immensely."

Keeping morale high is a crucial challenge for any combat unit. On June 8, the Headquarters and Headquarters Company of the 10th Mountain Division's 2nd Brigade Combat Team, which Ellard and Thor serve with, was struck by tragedy when an Afghan soldier reportedly opened fire on U.S. troops. The attack killed Lt. Col. Todd Clark, 40, and Maj. Jaimie Leonard, 39.

Thousands of miles from New York State, which both departed warriors called home, there are many thoughts and prayers for the Clark and Leonard families.

"Our hearts definitely go out to them," Ellard said. "We're greatly sad for them."

Even after a horrific act of violence, soldiers in Afghanistan must stay prepared for the unknown perils of the next mission. Every day, Ellard keeps Thor ready to find the next IED.

"We go out and hide (TNT or C4) on the FOB and give someone a route, or they hide them and give us a route," Ellard said. "We make sure our dog is still on odor every day so we know when we're outside, we make sure that we realize their change in behavior on explosive odor when we're outside the wire."

Thor, who sleeps in an air-conditioned or heated kennel, for which Ellard also expressed his thanks, has saved countless lives with his handler.

When even the most gentle breeze of danger is felt inside the tall, desolate mountains, Ellard and Thor are the first soldiers to shield their fellow troops.

"I have two security guys who go with (Thor and me) and we search the area of interest," the soldier said.

Through voice commands and hand signals, Ellard communicates with Thor as if he was any other soldier.

At just 22 years of age, Ellard trusts a dog with his life.

"He's become my best friend," the soldier said. "We're together every day."

As you mark Independence Day, take a moment to think about Spc. Logan Ellard, Thor, and their fellow U.S. troops still serving in Afghanistan. While walking and driving through rough terrain infested by the Taliban and al-Qaida's bombs, these brave men, women and military service dogs remind us of the very heroes who first freed Americans from tyranny.

"I love my job," Ellard, who is spending July 4th in Afghanistan, said. "And I love doing my job." 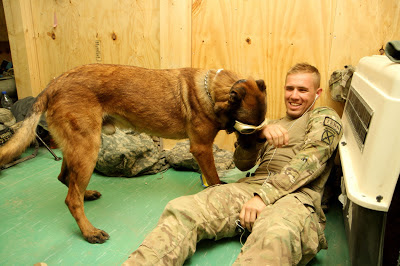