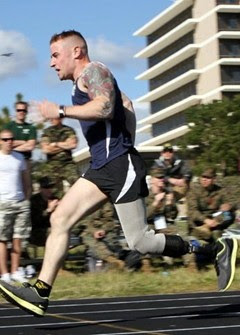 After Cpl. Jake Hill stepped on an improvised explosive device during a chaotic battle in Afghanistan's Helmand Province, the young Marine radioed his squad leader.

Through a dizzying haze of dust, smoke and ongoing gunfire, the Rapid City, S.D., native looked down at his feet.

"What I saw was a really badly broken left ankle," Cpl. Hill told The Unknown Soldiers. "I was like 'OK, this is fine, people break their ankles all the time.'"

Hill was later shocked when a doctor presented him with two difficult choices: replace his shattered foot with a cadaver bone or amputate his left leg just above the knee.

"The heel bone was gone ... just pulverized," Hill said from the Walter Reed National Military Medical Center in Bethesda, Md. "I kind of made up my mind right (there) that I wanted it cut off."

Few are forced to make such excruciating decisions, especially at age 19. But Hill, who was in elementary school on 9/11, later chose to join the Marine Corps because he believes it's noble for young Americans to serve their country.

"In the World War II days, everybody thought that was something you had to do, and it was, but nowadays it really is not," he said. "Not a lot of people do that anymore."

About two years after graduating high school and leaving South Dakota, Hill was guiding Marines through Afghanistan as a team leader.

"It's an odd thing to have to tell your friends to go get in combat and get into danger," he said.

On Sept. 16, 2010, Hill could have been at the movies, playing video games or hanging out with friends. Instead, he was on patrol in the rugged district of Sangin, one of Afghanistan's most dangerous places. Hill said nearly half the American and Afghan troops battling the Taliban were struck by bombs or bullets during the day's patrol.

"There were two (Afghan soldiers) who died and everyone else was wounded and taken back," Hill said. "We couldn't land (helicopters) because the fighting was so heavy out there in the combat zone."

As soon as members of his patrol were hit, Hill, who was serving with Company L of the 3rd Battalion, 7th Marine Regiment, took it upon himself to tend to the wounded.

"With one of his team members injured by a rocket-propelled grenade, (Hill) exposed himself to enemy fire a second time and ran to aid his Marine brother," a Marine Corps citation said. "He applied first-aid and led the rest of his team through 200 meters of fire-swept terrain to extract the casualty."

Like so many combat veterans I've spoken with, Hill skipped over his gallantry during our interview. He is too humble to take credit for his courageous, life-saving actions.

"Three or four days after my injury, my platoon commander told me that he was going to be putting me up for an award," Hill, now 22, said. "I said 'no, I don't want it.'"

In October 2011, Hill showed the world that no matter the challenge, Marines will never quit. On that chilly Washington, D.C., morning just before Halloween, the wounded hero ran the Marine Corps Marathon.

"It was awesome ... it made me realize that I really, really wanted to be a Marine again," Hill said. "I was always a Marine, but I wanted to do Marine things again."

Even though his lower left leg is now metal instead of flesh, Hill ran 26.2 miles in less than four hours.

On June 14, 2012, Lt. Col. Clay Tipton, Hill's former commanding officer, presented him with the Silver Star for his heroic actions in Afghanistan.

"Everybody did things equally as brave," Hill said. "It's an award for the whole unit."

Cpl. Jake Hill's award should also serve as an example for young Americans, especially after the horrific terrorist atrocity in Boston. The next time you're presented with a seemingly impossible challenge, think of what a 19-year-old Marine said after stepping on a powerful roadside bomb.