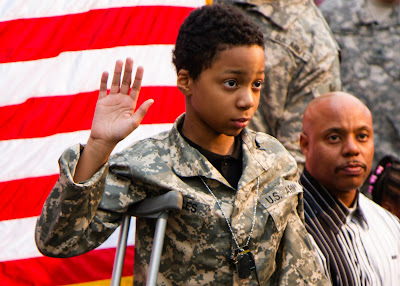 Khalil Quarles loves the U.S. military. Not only does the 10-year-old boy idolize those who serve, but has dreamt for years about putting on his country's uniform.

"He has Army figurines and talks about the Army all the time," U.S. Army Maj. Norland James told The Unknown Soldiers from Kuwait on Dec. 21. "He would love it if he could have a picture from an Army soldier or become an Army soldier himself."

Tragically, a terrible disease stands between Khalil and his dreams. The young boy, who lives in Baltimore, is suffering from terminal cancer. So when Maj. James heard about Khalil through a friend who works as a hospice nurse, the deployed soldier decided to act.

"We wanted to make his dreams come true," James said.

The 37-year-old soldier, who is serving in Kuwait as chief of medical logistics operations, has devoted the last 13 years of his life to the Army. The Albany, Ga., native, who has also been to Afghanistan twice, just spent another holiday season apart from his family and friends.

Amid the continuing sacrifices of military service, James remains intensely appreciative of civilians who support the men and women of the armed forces. When presented with a chance to brighten what could be Khalil's last holiday season, the soldier knew it was his opportunity to give back.

Six days before Christmas, a nurse told Khalil that someone special was waiting to talk to him on Skype.

"He was like 'wow, I can't believe it, I'm talking to an Army soldier in Kuwait who's deployed,'" James said.

The soldier will never forget the boy's reaction.

"Just seeing the look in his eyes ... you can't describe it," James said. "It was amazing and it made me smile."

As the soldier and young boy spoke face-to-face while separated by thousands of miles, Khalil could temporarily forget about his dreadful illness. For about ten minutes, Khalil's wish of speaking to a real-life soldier was finally realized. Unbeknownst to the elated child, though, an even bigger dream was about to be fulfilled.

"When I told him I have a couple of my friends waiting outside for (him), he had a look of amazement," James said.

As Khalil, who walks with crutches, made his way to the front of his family's home to see what James was talking about, the soldier sat at a computer station in Kuwait, eagerly awaiting what he knew was coming next. About 40 U.S. Army Reserve soldiers from Maryland's Fort Meade, along with neighbors and camera crews, were waiting to greet Khalil.

"To see him step out on the front stairs ... all those people," James said. "It gave me joy to see the happiness on his face."

As soldiers and supporters clapped and cried, Khalil was asked to raise his right hand after the singing of the National Anthem. The young boy, who never thought he'd have the chance to meet a soldier, let alone become one, then took the U.S. Armed Forces Oath of Enlistment. Khalil is now an honorary soldier in the U.S. Army Reserve.

"It meant a lot to us and definitely other people who had a part in making this happen," James said.

Early this year, James will come home after completing another overseas deployment. Given the soldier's extraordinary efforts to bring happiness to a sick boy and his loved ones, it wasn't surprising to hear what he plans to do upon returning to American soil.

"I'm hoping to actually meet Khalil and his family," the soldier said.

Every day, the men and women of the U.S. military and their families serve, sacrifice, and sometimes suffer while defending our freedom and security. Maj. Norland James has spent 13 years protecting those ideals. Thanks to this compassionate soldier and his fellow troops, it is an honor to introduce you to the newest member of America's remarkable military community.

His name is Khalil Quarles. 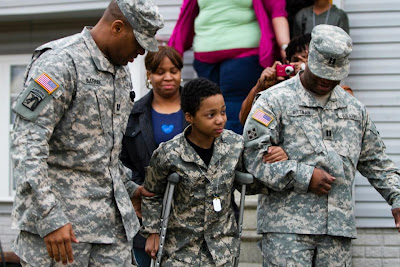