Before Cpl. Reece Lodder deployed to Afghanistan last fall, he agonized over leaving his beautiful wife behind.

"Preparing to say goodbye to the most important person in your life for seven months ... it hurts," the 22-year-old Marine told "The Unknown Soldiers" in 2011. "It's a struggle."

Today, after risking his life in one of the world's most dangerous places, Cpl. Lodder is home.

"It was a really good deployment," Lodder said Aug. 30 from Marine Corps Base Hawaii. "I'm thankful it's over, but sometimes I miss it."

The fact that anyone would "miss" Afghanistan's Helmand province, especially while stationed in Hawaii, speaks to the selflessness of a young generation that has consistently stepped forward since Sept. 11, 2001. But if you ask Lodder, he was simply doing his job and owes everything to his fellow Marines and his loved ones in the state of Washington.

"I had so much support from my family and church back home," he said. "God got us through this."

While some politicians and media pundits are self-proclaimed experts on the decade-plus Afghanistan conflict, the opinions of Americans like Lodder, as one of a relative handful to serve there, truly matter. From his perspective, America is making progress in Afghanistan because our nation's bravest men and women are still willing to serve and sacrifice.

"It's not a sexy story," the military journalist said. "But the (Afghan) people were very receptive to the work we've done."

Lodder, who jumped between several units while capturing images and filing reports, said a storyline pushed by some in the mainstream media — Afghan civilians universally despising American troops — is simply not accurate.

"They were thankful and kind of in awe of the fact that we were over there to help them and to serve," Lodder said. "In some respects, realistically, they're kind of used to us being there."

Still, tragic violence continues in Afghanistan, including an increase in so-called "insider attacks" against U.S. forces by terrorists wearing Afghan military or police uniforms. While Lodder's heart aches for the families of his fallen brothers and sisters in arms, the Marine believes the cowardly attacks reveal a drastically weakened enemy.

"The insurgents are so desperate ... that's what they're resorting to," Lodder said. "They're so weak because of all the work that we've done to push them out and cripple their insurgency."

Everyone in his unit came home from Afghanistan alive, Lodder said, although three Marines were wounded and awarded Purple Hearts.

"There was still the inherent threat of IEDs (improvised explosive devices) every time we went out," Lodder said. "We were fortunate to come back with all our guys."

While he was eager to confront the remnants of al-Qaeda and the Taliban, Lodder believes his unit saw less action because of brave American troops who served before them in the country where 9/11 was planned. Still, some terrorists remain.

"They're not completely gone," Lodder said. "They're still there ... still hiding ... they're just too nervous to attack us."

While reflecting on seven months that will remain with him for a lifetime, the Marine recalled a bitterly cold, damp evening that marked the fourth straight day out on patrol in southern Afghanistan's rugged terrain. But even amid harsh conditions that would wear down the toughest warrior, Lodder found solace. 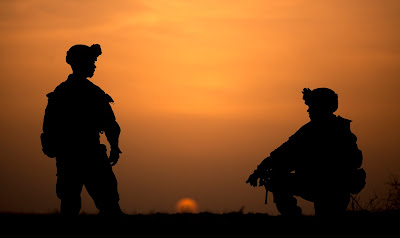 "I remember seeing the sun go down, and it was the most round, perfect, clear sunset I'd ever seen," he said. "I remember thinking that this was the first time I'd ever seen beauty in Afghanistan."

A few months later, Lodder saw an even more beautiful sight when he stepped back onto American soil. It was his wife, Krissy, running toward him with tears in her eyes and a huge smile on her face.

With Afghanistan behind them, Reece and Krissy Lodder are eagerly awaiting the birth of their first child.

"I'm so thankful that I'm here to support her," the Marine said. "My service means a lot to me, but my family and my faith is paramount."

Afghanistan is full of bloodshed, pain and heartbreak. But sometimes, even during the hell of war, there is also beauty. 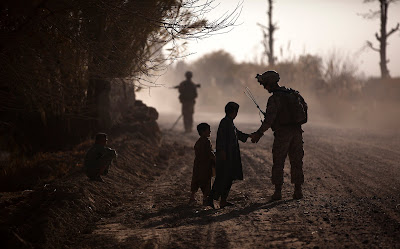