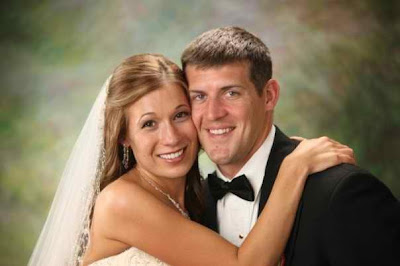 It's been two years since Amy Looney's husband, LT (SEAL) Brendan Looney, 29, was killed in Afghanistan.

"Before I could blink, life as I knew it had vanished," Amy recently wrote in the San Diego Union-Tribune.

It would have been understandable if this grieving Afghanistan war widow, 31, chose to spend the second anniversary of her husband's death in seclusion. Instead, the fallen Navy SEAL's wife woke up at sunrise in San Diego and spent Sept. 21 making others smile.

Amy and a group of friends brought food to a homeless shelter, paid parking meters, bought coffee for strangers at Starbucks and even gave a hungry family a grocery store gift card. They also brought treats to firefighters and police officers to thank them for their service. 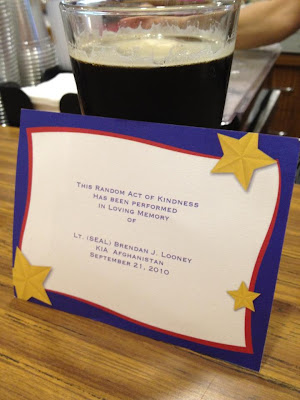 After each act was performed, the recipient was given a red, white and blue card decorated with gold stars.
"This random act of kindness has been performed in loving memory of LT (SEAL) Brendan J. Looney, KIA Afghanistan Sept. 21, 2010," it read.

In her moving Sept. 20 column, Amy challenged Americans to perform ten acts of kindness before the end of 2012 in honor of our nation's fallen heroes and their families.

"By uniting during such divided times, we can show the world that America is still the world's brightest light," she wrote.

I decided to join Amy in performing acts of kindness on Friday, Sept. 21, albeit from thousands of miles away in Atlanta.

My first visit was to a nearby barber shop. As a young female stylist started cutting my hair, she asked if I had the day off, prompting me to explain that the offices of the Travis Manion Foundation, where Amy and I both work, were closed to honor a fallen Navy SEAL.

Upon checking out, I gave the stylist a large tip before handing her a memorial card similar to the one Amy was distributing in San Diego. She paused and looked at Brendan's picture.

"This gives me chills," she said.

Next, I drove to a military recruiting station. Since Brendan was a SEAL, I visited the Navy first, and told a female sailor that I wanted to bring lunch to her office. Unfortunately, she had already eaten, but after thanking me for the offer, emphasized how much acts of kindness mean to those serving in uniform.

"A woman came up to me in a parking lot the other day and hugged me," the sailor said. "Those little things make a big difference."

Luckily, the Marines hadn't eaten, and allowed me to bring them a large order of buffalo wings. After handing lunch and Brendan's memorial card to the sergeant in charge, the Marine asked me to deliver a message to the Looney family.

"We may not have known this young man," he said. "But he was our brother." 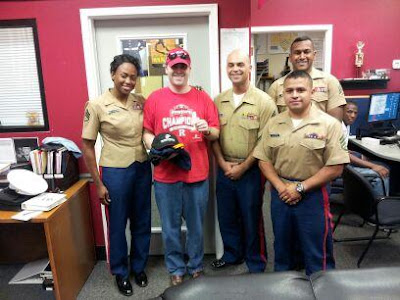 While ordering lunch for the Marines, I asked the manager of the Buffalo Wild Wings restaurant if I could leave a pint of Guinness for Brendan. He promptly placed the full glass at the center of the bar, along with the memorial card, which included Amy's request for acts of kindness. 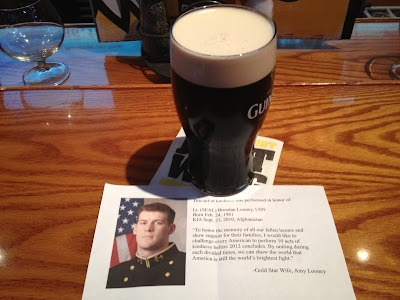 When I returned eight hours later, Brendan's beer was sitting beneath two American flags bought by the manager. The bartender said countless patrons had taken pictures of the noteworthy Guinness, resulting in many acts of kindness being performed right there in the restaurant. One patron, for example, bought ice cream for every child in the establishment at dinnertime.

"I had a tough week," the bartender said. "But things like this remind you there are still good people in the world." 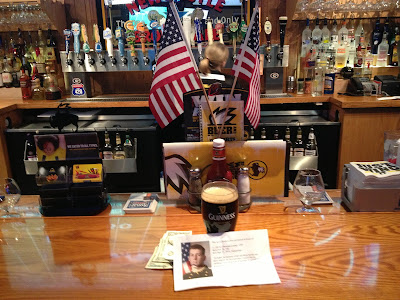 I didn't know LT (SEAL) Brendan Looney but can write with certainty that he was a devoted husband, son, brother, friend and warrior. The small acts I performed show just how easily each of us can join together in answering Amy's call for kindness.

Amy Looney's heart will always ache for her husband, his parents, his siblings, and the families of every fallen warrior. But one thing she won't do is quit.

"Hopefully, I will honor him by carrying on his thoughtful mission," Amy wrote. "I love you, Brendan." 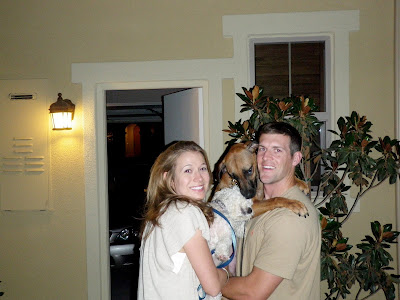