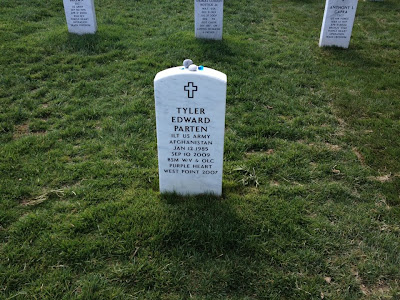 I wish every American could spend an hour in Section 60 of Arlington National Cemetery. My last visit was on May 11, and like every trip, it was a profound experience.

While the entire cemetery is filled with heroes, Section 60 carries urgent relevance because so many warriors from America's post-9/11 conflicts rest there. With each visit to the hallowed sector, one will tragically find new temporary grave markers bearing the names of U.S. troops recently killed in Afghanistan.

Behind each marker and headstone is a story of sacrifice. One of the first resting spots I encountered on the warm, sunny Friday afternoon was 1st Lt. Tyler Parten, whose grave was recently moved to Arlington. The 24-year-old Marianna, Ark., soldier was killed in Afghanistan on Sept. 10, 2009.

As I stared at 1st Lt. Parten's white headstone, with total silence filling the cemetery except for the occasional plane taking off from nearby Ronald Reagan Washington National Airport, all I could see was his mother's face. I met Lona Parten in a Birmingham, Ala., restaurant in January 2011, and seeing her anguish, as well as her commitment to driving forward in Tyler's honor, is a constant source of motivation.

Lona's surviving son and his wife are currently deployed overseas. Let us all hope and pray for their safe return.

The next grave I visited was Maj. Megan McClung, the highest-ranking female Marine officer to be killed during the war in Iraq. She died alongside Army Capt. Travis Patriquin, 32, and Spc. Vincent Pomante III, 22, when an enemy improvised explosive device blew up in Ramadi. 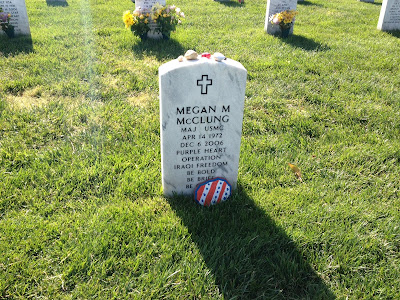 Having written and spoken about Megan as well as meeting her father and brother and speaking to her mother by telephone, I feel like I knew this remarkable woman. But I didn't. I just miss her, and wish everyone — particularly young women — knew the story of this world-class athlete, scholar, and patriot.

Two days before Megan's death, America lost Spc. Ross McGinnis, whose headstone is engraved in gold. That's because the 19-year-old Pennsylvania native was posthumously awarded the Medal of Honor — the nation's highest military decoration — for using his body to cover a live grenade that was thrown into his vehicle in Baghdad. He left behind his loving parents and siblings, but also saved the lives of all four soldiers riding with him.

"When Ross McGinnis was in kindergarten, a teacher asked him to draw a picture of what he wanted to be when he grew up," President George W. Bush said in an emotional White House ceremony on June 2, 2008. "He drew a soldier." 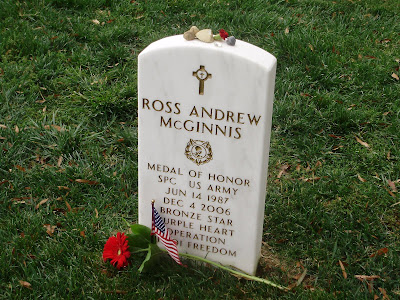 As I walked quietly through the long cemetery grass, I saw a man and woman sitting on lawn chairs under the twilight sky. They were at the grave of Army Cpl. Joseph M. Hernandez.

While I didn't want to intrude on their grief, I said the only five words I could think of while passing by: "I'm sorry for your loss."

Upon returning home, I learned that Cpl. Hernandez, 24, of Hammond, Ind., was killed in action alongside Maj. Brian Mescall, 33, and Sgt. Jason Parsons, 24, on Jan. 9, 2009, in Afghanistan's Zabul province. He left behind his wife, two young boys, his parents, and two brothers.

Somebody who knew this soldier thanked me for caring. Today, I want to thank Cpl. Joseph M. Hernandez and his two fellow soldiers for having the courage and bravery to make the ultimate sacrifice for our country.

I have never sacrificed anything. Over the past decade, thousands of brave men and women, including many buried in Section 60, have risked everything to ensure we live in a safer world than the one that seethed with hatred and fear on Sept. 11, 2001.

After President John F. Kennedy was assassinated on a previous generation's day of infamy, Nov. 22, 1963, an eternal flame was lit at his Arlington National Cemetery resting place. A short walk away is Section 60, where a new "greatest generation" has ensured that freedom's candle will always flicker. 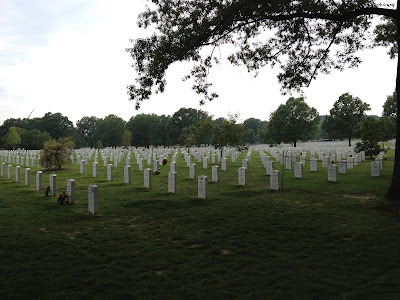