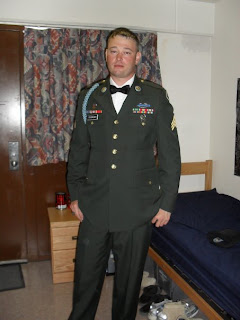 One fall day in Guthrie, Okla., Glenda Porter was preparing to call her younger sister to wish her a happy birthday. But before she could dial the number, her phone rang. It was Angie, the wife of her son, Sgt. Rusty Dunagan, who was deployed to an undisclosed location in southwest Asia.

"She asked me if I was sitting down, and I just started crying," Glenda, 55, tells The Unknown Soldiers. "I said, 'Just tell me he's alive."

This is the call that she, and every military mom with a son or daughter overseas, dreads beyond imagination.

"She said he was alive, but he lost both his legs," Glenda says. "I started to lose it, and then she said, 'He also lost his arm.'"

Glenda hung up, cried and began frantically contacting relatives. Her sister, Susan Porter, who had recently moved to Pennsylvania, was expecting some 48th birthday shenanigans from her sibling, until picking up the phone and hearing a sound she'll never forget.

"She was screaming," Susan says of Glenda. "She wasn't making any sense to me, and I thought something happened to our father, but it was about Rusty."

After realizing that there had been an explosion on Sept. 22, 2010 and that her nephew was fighting for his life in Germany, Susan asked Glenda how she could help.

"I told her that we need as many people to pray for Rusty as possible," Glenda says. "I told her to get on Facebook and put it on there, and she did."

What happened next has reinforced Glenda's unshakeable belief in God and the nation her son fought for. Thousands upon thousands of compassionate citizens began joining the page, "Hold My Hand," to send prayers to Rusty and his family.

"People have just been so kind," Glenda says about the Facebook page, which now has almost 20,000 supporters. "It really shows you how great America is."

Susan thinks her nephew's resolve caused the massive outpouring on the Facebook page she created.

"We get so busy and caught up with life, we're used to conveniences and certain things," Susan, who is planning an Aug. 6 benefit for her nephew in their hometown of Guthrie, says. "But when we hear about tragedy, and you can really put a face and name to it ... it becomes a resource for people to be encouraged and for people to do something."

In the first days following the explosion, Glenda would wait for 4:30 a.m. phone calls from a friend at the hospital in Germany. News was sometimes encouraging and sometimes grim. When I ask the soldier's mom how many surgeries Rusty has underwent since September, Glenda says she's "lost track."

"He almost bled to death during his first surgery, and it seemed like he was having surgeries and blood transfusions almost every other day," Glenda painfully recalls. "But he's really strong — Rusty is so strong."

Today, Dunagan, 30, is continuing his long recovery in San Antonio. There have been bad days, but also some good ones, like when the wounded hero got to see his three stepchildren for the first time since the explosion.

"I was concerned about how that would go," Glenda admits. "But they didn't act like anything was wrong; they went straight up to him and started hugging."

Dunagan, who has a nine-month-old baby with his wife, has gone through more uncertainty than most of us will in a lifetime. But through faith and genuine appreciation of his remaining blessings, this soldier is still fighting.

"Someone asked him why he's so positive," his mom says. "He said it's because he didn't pass out — he remembers the explosion — he looked down and saw his legs and an arm gone, and yelled for the medic."

When Glenda got that heartbreaking phone call from her daughter-in-law, she wanted to be told that Dunagan was alive. He is, with a grateful nation holding the hand he has left. 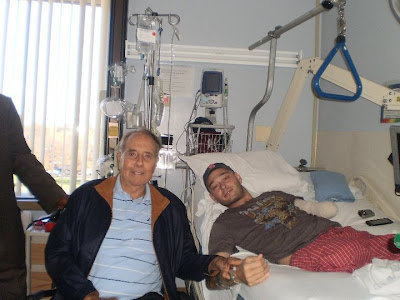