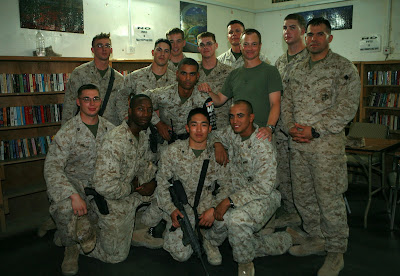 "A nation which forgets its defenders will itself be forgotten," actor Gary Sinise, quoting President Calvin Coolidge, recently wrote to U.S. troops in a poignant letter. "I hope these 'Letters from Hollywood' will help to let you know that your nation has not forgotten."

Sinise, of course, is instantly recognizable around the world for his unforgettable portrayal of Lt. Dan in "Forrest Gump." He is also one of America's most determined supporters of our armed forces, as his fine work with the USO demonstrates.

Sinise wrote the letter because a fellow actor, D.B. Sweeney, asked for his help after noticing a glaring void of enthusiasm for the military in Tinseltown. It led Sweeney to launch "Letters from Hollywood," which gives celebrities a unique chance to reach out to men and women in uniform.

Sweeney, who starred in films such as "Eight Men Out," "Memphis Belle" and "The Cutting Edge," told The Unknown Soldiers that he believes a substantial number of Hollywood actors are oblivious to the daily sacrifices being made by thousands of fellow Americans in Afghanistan, Iraq and around the world.

"I don't think the majority really have views except what they've been handed," the actor said.

The Feb. 27 Academy Awards broadcast reinforced Sweeney's point of view. During the marathon 185-minute telecast, our men and women in harm's way received no substantial recognition.

In addition to keeping the wars in Afghanistan and Iraq in our national consciousness, without letting politics cloud the extraordinary accomplishments of troops ordered to carry out dangerous missions, Sweeney thinks the film community has a responsibility, especially in wartime, to portray the military fairly.

"There have been some movies in Hollywood that denigrate our troops with the cliche that they're poor, stupid or have no options," Sweeney, who held a special 2008 screening of the movie "Two Tickets to Paradise" for troops in Iraq, said. "I find the opposite to be true; in fact, I know high-ranking officers who have turned down higher salaries in the private sector."

"I've been involved with WWP (Wounded Warrior Project) since 2004 after going to Iraq with Jim Gandolfini and witnessing what you proud patriots do for God and your country," Sirico, who played Paulie on the hit HBO show, wrote to the troops. "And I thought I was a tough guy?!?! Fughedaboutit!"

A particularly moving letter was written by Gina Elise, who I had the pleasure of meeting at a 2010 gathering of military bloggers. Elise tirelessly travels the globe visiting injured service members and veterans, and poses for pin-up calendars to benefit the wounded.

"Your sacrifices have shown me that life is about giving to and helping others. You are my role models," Elise, whose charitable calendars can be purchased at pinupsforvets.com, said. "Please know that we on the home front are thinking of you and wish every service member a safe return home."

Elise got an overwhelming response to her letter from warriors fighting on America's post-9/11 battlefields.

"It is such a morale booster when great Americans like you stand behind and support us," a U.S. service member serving his third overseas tour wrote to Elise from Afghanistan.

Sweeney is hoping more Americans, especially celebrities earning exorbitant salaries, will reach out to the men and women protecting our way of life.

"They don't join the Army for any other reason than to serve the country," Sweeney said of America's all-volunteer force. "We live in the greatest country in the world, and we're lucky to be born here."

There was a time when supporting our military was a top priority in Hollywood, which included actors like Jimmy Stewart and Henry Fonda, who selflessly volunteered to risk their lives after Pearl Harbor. As the 10th anniversary of the 9/11 terrorist attacks approaches, a new generation of stars, led by genuine patriots like Gary Sinise and D.B. Sweeney, are ahead of their time. 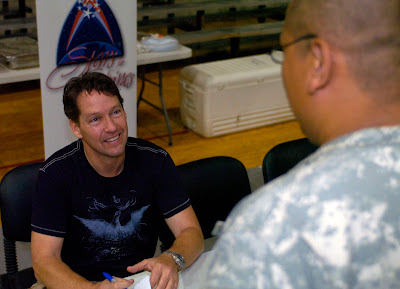