Thanks for all you do 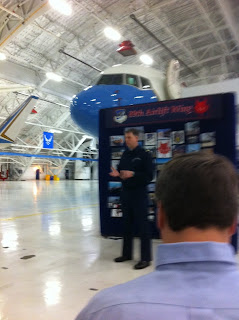 Moments after arriving at Andrews Air Force Base in Maryland on Tuesday and passing a security check, our bus parked outside a large hangar. Most in our tour group of about two dozen USO employees and volunteers had no idea what was in store next, including myself.

When the door opened, the first thing I saw was a huge, glistening white and blue jet with "United States of America" proudly displayed on the side. I was told this was the 757 used by the Vice President Biden, known as "Air Force Two" when he is on board.

While I will always remember being led inside the plane and even sitting in the vice president's chair, there is something else that left me even more impressed. Every single airman I met was warm, genuine, and gracious. That's why whenever I shook one of their hands, the first words out of my mouth were "thanks for all you do." And the 89th Airlift Wing does a lot, as only exemplary Air Force personnel get this close to the commander-in-chief and other important officials. Simply put, the men and women on Joint Base Andrews are at the top of their game.

I have to admit, though, the planes we saw were pretty cool! 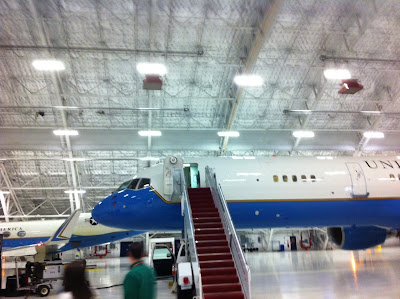 As we learned in the briefing pictured above (I apologize for the blurriness), the 757 and Gulfstream jets we saw are also used by the first lady, first daughters, and secretary of state. Adm. Mike Mullen and Gen. David Petraeus have also been on both jets.

The airmen I met answered every single question our group had and even pressed us to ask more. Even the "flight attendants" -- all highly trained, stellar airmen -- spoke with excitement about cooking Joe Biden or Michelle Obama's food in a space so small that they can barely move more than a few feet. The men and women of the 89th Airlift Wing love what they do, and to say they're good at it would be an understatement.

The next time you see the president, first lady, vice president, or secretary of state land somewhere on TV, think for a moment about all the incredible American service members who make these high-security, high-stress moments seem routine. The most powerful people in the world wouldn't have much power without the men and women who protect our nation and its leaders.

To every single man and woman serving in the United States military, we say thanks for all you do. 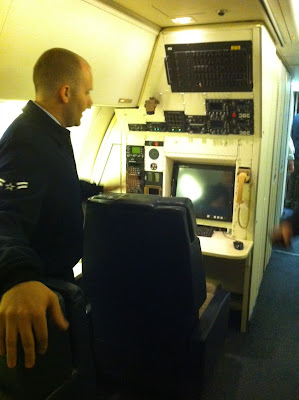