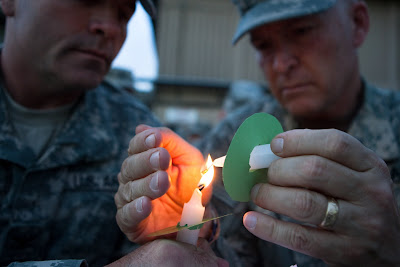 The war in Afghanistan is the top story on most cable news shows and websites today, but only because controversy has erupted over an interview Gen. Stanley McChrystal recently granted to Rolling Stone. Unfortunately, finger pointing and beltway bickering interests many members of the press much more than sacrifices being made on the battlefield.

Over the past 24 hours, the Pentagon has announced six Army casualties from various locations in Afghanistan. The fallen heroes hailed from different states, where their families and friends grieve at this hour. The Unknown Soldiers will make every effort to bring you their stories in the weeks ahead.

When the wars in Iraq or Afghanistan make brief reappearances in the headlines, we cannot lose sight of the thousands of men and women on the ground or their families at home. While I have not had the honor of serving our country, I can say with certainty that war is not about meetings, hearings, or cable news shouting matches. It is about men and women volunteering to put everything on the line for this great nation.

While I will leave debating the McChrystal interview to others, politics should never get in the way of honoring our heroes. Without these extraordinary American patriots, who serve with pride and dignity, we wouldn't have the freedom to argue in the first place.