'As Americans, we don't quit' 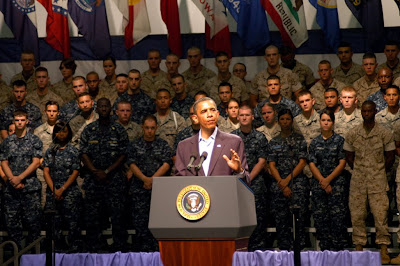 Thousands of servicemembers at Pensacola Naval Air Station hosted a special visitor on Tuesday: the commander-in-chief. While President Obama's visit to Florida was primarily centered around the disastrous oil spill affecting Gulf states, he also delivered important remarks about the wars in Afghanistan and Iraq. While this site has always placed troops above politics, a rallying cry from the commander-in-chief is not a political event and should never be viewed through a partisan lens. It is essential for volunteer warriors to know that their leader stands with them, regardless of the president's political party.

While congratulating the military on its success in Iraq and pledging to defeat terrorism in Afghanistan, the president also extended his condolences for the loss of four Pensacola-based fallen heroes in a recent training crash in north Georgia. Retired Lt. Cmdr. Charles McDaniel, Capt. Jason Paynter, 1st Lt. Shawn Nice, and Ens. Zachary Eckhart were killed in the April 12 accident. President Obama also sent his prayers to the families of five servicemembers from California's Camp Pendleton, who were killed last week in Afghanistan.

Like many speeches given by President Bush to the military since the 9/11 attacks, it is inspiring to hear an enthusiastic crowd of America's best and brightest cheering during an address by President Obama. While nothing is certain in the world of politics, men and women like the proud personnel stationed at NAS Pensacola ensure that America remains the greatest nation on earth.