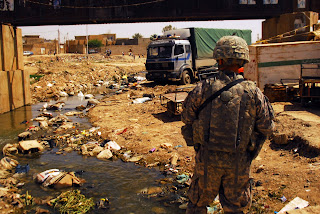 As the withdrawal of troops from Iraq accelerates, some may forget that our men and women stationed there are facing dangerous remnants of a broken enemy. The above image, which was taken in Jalula in April, shows that American troops are often battling deplorable conditions as they help Iraqis clean up from years of violent conflict.

Tragically, Jalula became the site of an attack that will permanently alter two American families on June 11. According to the Pentagon, Sgt. Israel O'Bryan and Spc. William Yauch were killed when terrorists attacked their unit with a car bomb. The soldiers were assigned to the 5th Battalion, 20th Infantry Regiment, 3rd Stryker Brigade Combat Team, 2nd Infantry Division, Joint Base Lewis-McChord, Washington. Six fellow troops were reportedly injured in the attack.

The Dyersburg State Gazette reports that Sgt. O'Bryan hailed from Newbern, Tennessee, graduating from high school there in 2004. According to the article, the 24-year-old soldier, who was nicknamed "Izzy," was on his second deployment to Iraq. During his first combat tour, he met his future wife, Brenna O'Bryan, who later retired from duty to care for their young son. Sgt. O'Bryan will soon be buried in South Dakota, where his wife had moved to be closer to her family during her husband's time overseas.

The Arkansas Democrat Gazette reports that Spc. Yauch lived in Batesville, Arkansas, with his wife. Shortly after the Pentagon notified the Yauch family about Friday's tragedy in Jalula, Sen. Blanche Lincoln released the following statement:

“My heart goes out to the family of Specialist Yauch who made the ultimate sacrifice on behalf of our nation. Along with all Arkansans, I am grateful for his service and for the service and sacrifice of all of our military service members and their families. I am committed to ensuring they have the full support that they need and deserve. Our grateful nation will not forget them when their military service is complete."

While the level of U.S. forces will soon be reduced to 50,000 and the name of their mission will change to Operation New Dawn, we cannot let solemn news from Afghanistan or the media's reluctance to report on either conflict distract us into thinking our military does not face great danger in Iraq on a daily basis. Sgt. Israel O'Bryan and Spc. William Yauch volunteered to fight for a cause bigger than themselves, and helped ensure that the war in Iraq will be remembered as a conflict American ultimately won, despite divisions at home and abroad. When it comes to thanking our troops and recognizing their sacrifices, we all stand shoulder-to-shoulder in unbreakable unity.