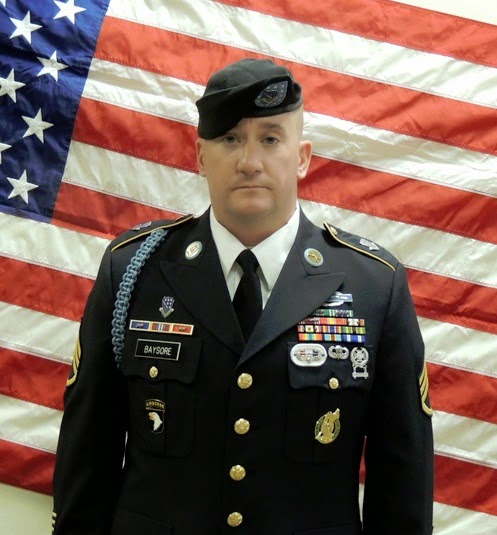 When 6-year-old Darren Baysore looks up into the night sky, he thinks of his dad.

"They were all about the stars and 'I love you to the moon and back,'" said Darren's mom, Jamie Baysore, wife of U.S. Army Staff Sgt. Thomas Baysore Jr.

Less than a year ago, Darren's father made the ultimate sacrifice while serving in Afghanistan. While the loss of a loved one is crushing for any military family member, the impact on a child is immeasurable.

"At first he was OK because he didn't really understand," said Jamie, while adding that war's painful reality is starting to set in.

"He drove two hours to take me on our first date," she said with a chuckle. "His eyes were gorgeous."

In October 2007, Jamie exchanged vows with a soldier who embodied the very best qualities of a good husband.

"He was driven," she said. "He had everything together and he was all about family values."

Stationed on the Kentucky-Tennessee border at Fort Campbell, Staff Sgt. Baysore had already completed respective deployments to Afghanistan and Iraq before being called upon to serve a third combat tour. Under the evening sky, Thomas said goodbye to his wife and son just as the summer of 2013 began.

Not long after arriving in Afghanistan, the soldier told his wife that his unit faced serious challenges on a still-volatile battlefield.

"He said this deployment was worse than the one he went on after 9/11," Jamie recounted.

On Aug. 1, 2013, Thomas received word that several Afghan civilians had been injured in an improvised explosive device attack. The soldier recounted the day's events in his journal, which Jamie subsequently released to the media. The Standard-Journal in Thomas' hometown of Milton, Pa., reprinted the entry.

"The gentleman informs me that there is only one person injured, a girl about 9 years old," Staff Sgt. Baysore wrote. "She is laying in the back of one the vehicles. So, again I push the locals away for my own security and start to look at the girl.

"I saw that her face is somewhat messed up, a lot of blood, but no missing facial features (which is good)," he continued. "However, her right eye looks bad, damaged in some way. I asked if I can look her over being that she is a female and a little girl."

"I start checking the parts I can see, since they have her covered by some blankets," the soldier wrote. "Her legs were bloodied but I don't see anything major yet. I asked the local what other injuries she has. He told me her arm is gone. I said what do you mean 'gone.' I asked if it was recent or something that happened a while ago. He told me it was the IED. That's when they moved the blanket. Her right hand and part of her arm was gone."

Thomas sprung to action, finding more wounds to her thigh and working with medics to tie tourniquets. He asked his superiors to authorize a medevac flight for the girl, and agonized as the request went up the chain of command.

"I am literally staring this girl in the one eye that still is working, waiting for her to die in my arms," he wrote.

The helicopter arrived, and the little girl survived. Thomas saved her life.

"I'm glad you are my friend and I'm glad you were strong enough to fight for your life," Thomas wrote to the girl in his journal.

On Sept. 26, 2013, Staff Sgt. Thomas Baysore Jr., 31, was killed in Afghanistan's Paktya Province by "an enemy combatant wearing an Afghan National Army uniform," according to a news release.

"I remember falling in front of the door and my son asking what was wrong," Jamie said.

As Darren marks one year since the passing of his dad, an American hero who saved the life of an Afghan child, he has one deeply moving request.

"On (September) 26 we're asking everyone at Fort Campbell and everywhere else to leave a porch light on," Jamie Baysore said. "(Darren said) if you leave your light on, that dad can see that he's sending his love."

Tom Sileo is a nationally syndicated columnist and co-author of BROTHERS FOREVER: The Enduring Bond Between a Marine and a Navy SEAL that Transcended Their Ultimate Sacrifice. Written with Col. Tom Manion (Ret.) and published by Da Capo Press, BROTHERS FOREVER is available now. To find out more about Tom Sileo, or to read features by other Creators Syndicate writers and cartoonists, visit the Creators website.
Posted by Tom Sileo at 10:00 AM