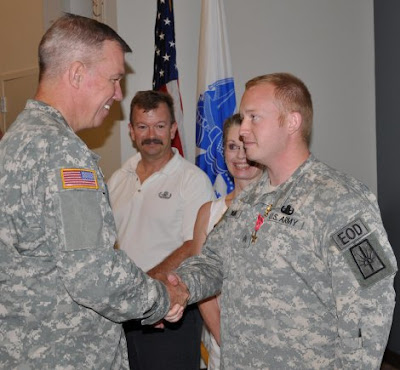 "I'm not sure what all the hubbub is all about," New York Army National Guard Sgt. Joshua Young reportedly said after receiving the Bronze Star with Valor on July 19. "It happened a long time ago, and I would do it again."

According to his award citation, Sgt. Young's actions on March 16, 2012, were anything but ordinary. Surrounded by about 50 Taliban fighters after a huge explosion in southern Afghanistan, Young braved enemy gunfire to save the life of his badly wounded platoon sergeant, who lost both legs but ultimately survived the attack.

Young, who is from Perinton, N.Y., is just 26 years old. His modesty represents the most remarkable percentage point of our population: the courageous men and women who volunteer to serve in a dangerous post-9/11 world.

"We're extremely proud of Josh and his accomplishments," the hero soldier's mother, Kim Young, told Sgt. Corine Lombardo. "He never really told us a lot about the incident, so we are learning about his actions today."

U.S. Marine Sgt. Matthew Woodall, now 28, did not have to spend two days dodging bullets and crawling through cornfields in July 2011. Instead of fighting the Taliban on their turf, he could have been home enjoying a summer in Paducah, Ky. He chose to serve.

"I was doing my job; I don't think I did anything different than anyone else would," Woodall, who recently left the Marine Corps, told Sgt. Alfred Lopez. 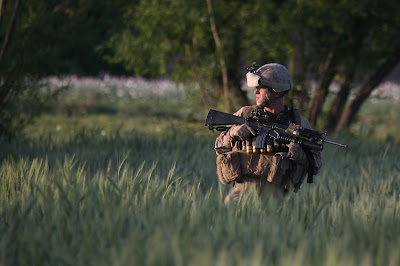 Woodall's humility became even more apparent after reading his citation for the Silver Star, which he was awarded on Aug. 2.

"(Then-Corporal) Woodall rushed his squad forward when enemy fire wounded the Marine directly in front of him," the citation reads. "Exposed and under a hail of enemy fire, he laid down suppressive fires and shielded the wounded Marine with his body until a (Navy Hospital) Corpsman arrived."

Even though the citation credits Woodall with defeating an enemy attack, the hero Marine is quick to shift attention elsewhere.

"I know that the citation that was read says my name on it, but I'm just an individual Marine," Woodall told the military reporter. "My squad was just amazing." 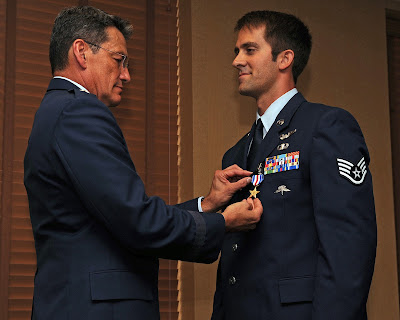 "It's an honor being recognized for just doing my job," Kline, 33, told Airman 1st Class Christine Griffiths. "I worked with some awesome guys, and (it) was nice being a part of it."

U.S. Navy Petty Officer 1st Class Benny Flores, 30, is from the U.S. territory of Guam. On April 28, 2012, the Navy Hospital Corpsman was in remote southwestern Afghanistan when an improvised explosive device blew up under the vehicle he was riding in.

"With shrapnel wounds to his arms and neck, Hospital Corpsman First Class Flores treated the nearest wounded Marine while he was engaged by enemy small arms fire," Flores' Silver Star citation reads. "He assisted the wounded Marine in maneuvering to a covered position and without hesitation, ran back into the street, exposed to enemy fire, and quickly provided medical assistance to a severely wounded Afghan Uniform Police Officer." 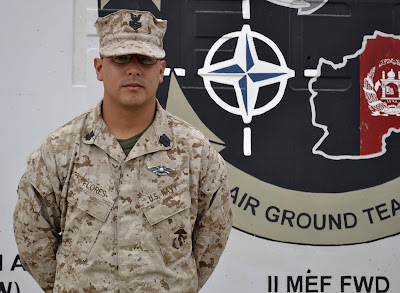 When Flores received his award on May 3, his thoughts were with the family of a Marine who didn't survive the harrowing attack.

"We lost one guy, Master Sgt. Scott Pruitt, and to this day he's always in my thoughts and prayers," the hero sailor told Cpl. Mark Garcia. "I really wish he were here, maybe not for the ceremony, but just to see his face and him being with his family — his two daughters that he left behind."

I wish some of our nation's so-called celebrities could read the words of Sgt. Joshua Young, Sgt. Matthew Woodall, Staff Sgt. Zachary Kline and Petty Officer 1st Class Benny Flores. Instead of being consumed with their own popularity, their first instinct is to salute others.

You won't find most of America's true celebrities in Hollywood. They're in communities all around us. The next time you see a U.S. service member or veteran, shake their hand and say thanks.