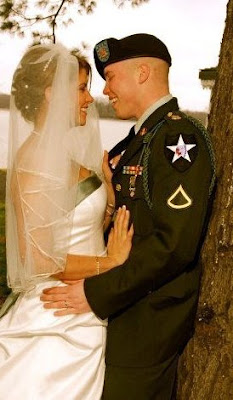 When Spc. Austin Monk deployed to Iraq in August 2009, the soldier's wife expected the worst.

She never thought her 20-year-old husband's combat deployment would end with a shocking diagnosis of leukemia.

"You never expect them to come back with cancer," she said.

Laura met Austin on an early morning bus ride from her native Philadelphia to New York City in December 2007. After initially being too nervous to talk to the "cute soldier" from Texas as the bus made the short trip up Interstate 95, they struck up a conversation.

"Everything else that wound up happening in our lives showed we were meant to meet," Laura said.

Austin and Laura got married in March 2009, shortly after the soldier returned from Korea.

"It was awesome because we got to build our relationship through conversations, learn about each other over the phone and have an emotional connection," Laura said. "We just fell in love."

"This is what I signed up to do," Austin said to his wife. Austin first complained about a terrible headache during one of the couple's Skype conversations. Then, on Halloween 2009, Austin wrote Laura a MySpace message saying he had a 104-degree fever.

"Don't worry about me," Austin added.

A few weeks later, fellow soldiers found Austin lying on the floor of his barracks. The ordeal that followed, which took the soldier from hospitals in Iraq to Germany, left Laura feeling helpless as she agonized over her husband's condition from thousands of miles away.

"They initially thought he had mono or tuberculosis and that the headache could have been from his wisdom teeth," Austin's wife said.

When Laura was informed her husband was suffering from leukemia, all she wanted was to be by his side.

After the Army flew Laura to Germany, she would rarely be separated from Austin again, except for one special week.

"He told me to go to Paris," Laura said. "Even though he was stuck in the hospital, he wanted to make it enjoyable for me."

Austin and Laura eventually ended up at a top cancer hospital in Houston. With Austin's cancer in remission after a May 2011 bone marrow transplant, the Monks were preparing to head home to North Carolina, where the soldier was stationed, with a renewed sense of optimism.

"We thought we were good," Laura said. "It was normalcy ... normalcy for us."

Austin collapsed just hours before the couple's flight. A few hours later, the soldier learned his cancer had returned.

"That was the last time he was ever outside a hospital," Laura said.

The Monks eventually returned to North Carolina, where Austin, 22, would spent his last days in a hospice facility. In the early morning hours of Oct. 5, 2011, Laura, who met the love of her life by chance on a bus, told her husband it was time for his next trip.

Even after three years of pain, Laura feels deeply inspired by the courage displayed by her husband, both as an American soldier and young cancer patient.

"I want him to be remembered as the smiling Austin, the guy who loved the Dallas Cowboys, the guy that no matter what the consequences, signed up and joined the Army," she said.

Spc. Austin Monk will always be with his wife. And due to the wonders of medical technology, Laura still hopes to bear his children.

"He would have been a great dad," she said. "But he'll be looking down on us."

Laura Monk expected the worst when her husband went to Iraq. But even after the unimaginable ordeal that followed, her outlook has changed for the better.

"I have to make the best of it because it's all I've got," she said. 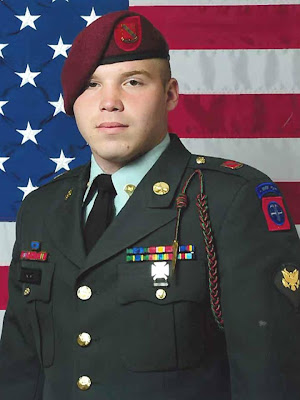