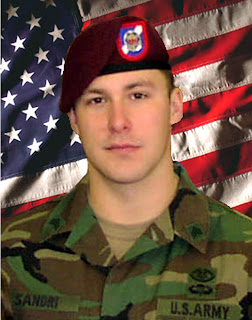 Bob Sandri is a kind man. But when it comes to the death of his son, he doesn't mince words.

"He was killed by a vicious enemy," Sandri told The Unknown Soldiers.

It takes a particularly ruthless foe to fire rockets at a medical facility, which is what happened in Fallujah, Iraq, on March 20, 2004, according to the military. On that terrible day, Sgt. Matthew Sandri, 24, a combat medic, was killed alongside Lt. Col. Mark Taylor, 41, an Army surgeon and fellow 82nd Airborne Division paratrooper.

As he grew up playing Army men with his cousins, Matt "loved everybody."

"Just like his mother and his grandparents, Matt didn't have an enemy in the world," his dad said. "Had you met him, you would probably have liked him instantly."

Whenever he saw kids being picked on, Matt would stick up for them. He brought this same spirit to the military as a soldier serving in Afghanistan and Iraq, where terrorists and tyrants spent decades intimidating innocent civilians.

Matt was waiting to start jump school training at Georgia's Fort Benning when the 9/11 attacks stunned the nation. After graduation, the paratrooper quickly deployed to southern Afghanistan, where he would help set up a trauma center in the insurgent hotbed of Kandahar.

"We didn't know for sure that Matt (would deploy) so quick," Bob said. "But as an American, you realize somebody's gotta do it."

On the combat medic's first battlefield support mission in the summer of 2002, Matt and his fellow troops experienced a life-threatening situation that eventually became a hallmark of terrorist activity in Afghanistan and Iraq. They drove over an improvised explosive device.

"There was just this huge explosion under the vehicle," the soldier's father recalls his son explaining. "It wounded a couple of soldiers and banged up the translator."

The bravery Matt displayed during the harrowing incident endeared him to his unit. Yet whenever he called his parents, the soldier refused to brag about his battlefield accomplishments.

After returning from Afghanistan, the soldier was back at North Carolina's Fort Bragg for only about six months before deploying to Iraq.

"It was Fallujah in 2003, and they saw more casualties than they wanted to," Bob said.

Sgt. Sandri, whose deployment was extended into the spring of 2004, was working in the same type of trauma center he helped set up in Afghanistan when insurgent rockets smashed into the building. Despite frantic efforts to revive him and Dr. Taylor, the soldiers, who were in Iraq to care for the wounded, died of their injuries.

The Sandris were coming home from church when they saw a military messenger waiting on their front porch in Shamokin, Pa. Nearly eight years after Bob stopped his car in the middle of the street, where the soldier delivered the dreadful news, that tragic day often still feels like "seconds ago" to Bob, Annette, and Matt's three siblings.

Since thousands of supporters filled a huge auditorium and lined Pennsylvania streets, there have been many more honors for the Sandri family. Responding to a letter from Matt's youngest sister, Lydia, President George W. Bush quietly invited the family to an event in New York and then the White House just before leaving office in January 2009.

While Bob deeply appreciated the president's kindness, one honor stands above the rest. In 2008, the Taylor/Sandri Medical Training Center, which the 82nd Airborne Division named in honor of the fallen heroes, opened at Fort Bragg.

Since Sept. 11, 2001, more than 6,000 American troops have died in Afghanistan and Iraq. Sgt. Matthew Sandri served with honor in both countries. As his father goes to sleep every night seeing his oldest son's face, he believes the fallen watch over the nation they died to protect.