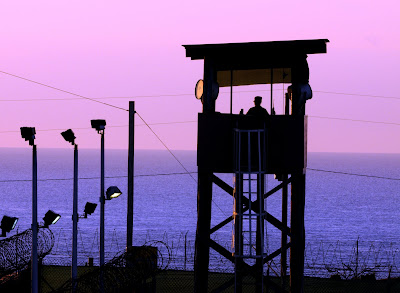 Every morning for the past nine years, American service members have watched over the Joint Task Force Guantanamo detention facility in Cuba. Steps away from the bright blue ocean and some of the world's most dangerous terrorists, troops like Spc. Emely Nieves, pictured in the Honor Bound Guard Tower on January 7, are responsible for some of the war on terror's most sensitive work.

While Guantanamo became a symbol of ideological differences in the United States, especially in the latter portion of the last decade, the men and women in uniform there are not politicians. They follow orders, whether that means interrogating, guarding, or providing medical care for suspected terrorists, or taking the first steps to release detainees cleared by courts.

Eight thousand miles away in Afghanistan, where many alleged members of al Qaeda or other terrorist organizations were captured, volunteer warriors patrol America's post-9/11 battlefields as the sun goes down. Over the past week, the Pentagon has announced the deaths of five U.S. service members in Afghanistan. The first three soldiers listed below were killed in action, while the soldier and airman at the end of this tragic grouping died in non-combat incidents.

Tuesday in Uruzgan province, U.S. Special Forces helped Afghan police destroy 15 improvised explosive devices that could have killed, maimed, or terrorized innocent civilians in Shahid-e Hasas district. While these stories no longer make headlines in the United States, I believe saving lives is both noteworthy and extraordinary.

As sweeping changes in Egypt rock the world community, let us not forget all the daily sacrifices being made by brave Americans serving in our military. From guard towers at Guantanamo to the runways of Kandahar Air Field, between sunrise and sunset, flashes of freedom peek through the clouds.