Room at the Top 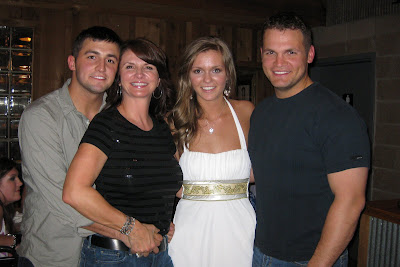 As Lona Parten stared into a sunrise atop the world's tallest freestanding mountain, she reflected upon the darkest year of her life. The last 3,000 feet of her August climb to Mount Kilimanjaro's summit took seven hours, through frigid, pitch-black conditions. Yet she was determined to equal a feat that her sons, 1st Lt. Tyler Parten and 2nd Lt. Daniel Parten, once fulfilled together.

"Come hell or high water, I was going to do it myself," Lona, 48, told The Unknown Soldiers.

On Sept. 10, 2009, her eldest son's life ended on a mountain in Afghanistan's Kunar province. Tyler, 24, was leading a platoon of the Army's 3rd Squadron, 61st Cavalry Regiment toward a Taliban stronghold when he was struck by enemy sniper fire.

On that terrible day, a life devoted to faith, music and concern for children ended brutally. Lona said Tyler's body remained on the hill for nearly 10 hours after his death, with enemy bullets repeatedly striking her son as fellow troops were pinned down by sniper fire.

"It is true pain ... indescribable," a tearful Lona said after recounting the dreadful details. Her voice shook throughout our conversation, on the day after what would have been Tyler's 26th birthday.

"Every fiber of your body hurts and sometimes you can't even breathe," she added.

Her surviving son, Daniel, 24; daughter Anna Laura, 20; and ex-husband Dave, 55, all wear memorial bracelets identical to the one I noticed on Lona's right wrist in a Birmingham, Ala. restaurant. The bracelets are never removed, nor are haunting images described by still-grieving members of Tyler's platoon. Yet despite his deployment's tragic ending, fellow soldiers said Tyler embraced his time in Afghanistan.

"They said he came into his own there and truly loved it," Lona said, briefly perking up. "He was full of compassion, music and love."

Tyler's private journals, which Lona treasures and has spared no expense to copyright and possibly publish, reveal that the warrior's heart was constantly aching for Afghan children savaged by terrorism, hate and war.

"When reading his journal entries, you see the pain and anguish, but then his words would end on a positive note," she said.

The words Lona used to describe what transpired in the hours and days after her family learned of Tyler's death — anger, blame, depression, screaming, crying — pierced my heart.

But like his journals, the fallen warrior's Marianna, Ark., memorial service ended on a positive note.

"My children sang, played guitar and did everything that Tyler would have loved," Lona recalled, reminding me that her son loved to play music for kids in Afghan villages.

Few American moms face a second son deploying to war after losing their first born in combat. Lona said Daniel and his wife, 2nd Lt. Tara Parten, will eventually head to Afghanistan after they complete training. Like Tyler, both are West Point graduates full of bravery, patriotism and purpose. But that doesn't make it any easier for a mother to bear.

"It is so hard to even think about him going into combat," Lona replied after I asked about Daniel. "How will I sleep? How will I deal with the phone ringing or knocks at the door?"

The light at the end of the Kilimanjaro darkness has helped Lona cope with her constant fears and deep emotional scars. She may have lost her eldest son on a mountain in southwest Asia, but she rediscovered his spirit at Africa's peak.

"When the sun came out, it all seemed better," Lona remembered. "It's not, but you have to come to peace with it."

"Something snapped: I can't continue to be sad all the time," she continued. "I'm not going to lose Tyler or forget Tyler just because I'm happy."

Perhaps the poignant closing sentence of 1st Lt. Parten's journal can comfort the loved ones of more than 4,600 American troops killed in action since Sept. 11, 2001.

"If there is anything I've learned, though, it's that the future is in God's hands."

For the families of America's fallen heroes, there is still room at the top of the mountain where one mom found hope.