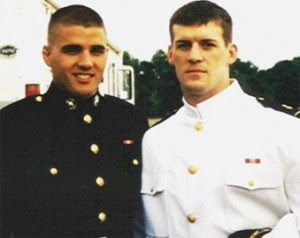 Horrific news from Iraq's Al Anbar province was still sinking in when the Manion family's phone rang in Doylestown, Pa. On the line was Brendan Looney, calling in the middle of grueling Navy SEAL training. The strong, aspiring warrior was bawling hysterically.

Earlier on that Sunday, April 29, 2007, Looney's Naval Academy roommate and dear friend, 1st Lt. Travis Manion, was killed by a sniper's bullet as he drew enemy fire away from wounded Marines. Manion, 26, was posthumously awarded the Silver Star and Bronze Star with Valor for heroism and gallantry displayed in combat.

Before Manion left for what would be his final combat tour, someone asked him why he had to go back to Iraq. The Marine's response was simple, but direct: "If not me, then who?"

Looney asked himself the same difficult, poignant question as he contemplated quitting SEAL training to mourn his friend.

Looney went all in on Navy SEAL training, perhaps the most physically demanding 30-week program known to man.

"He dedicated the rest of his training to Travis," Brendan's sister, Erin Looney, told me. "He would never give less anyway, but he was going to give that much more for Travis — that extra little edge."

On June 22, 2008, Lt. Brendan Looney graduated as "Honor Man" of his class. With his wedding and a deployment to Iraq just three weeks away, Looney made an emotional journey to Pennsylvania his top priority.

"When he graduated from SEAL school, the first thing he did was visit my parents," Ryan, 31, said.

Looney made it home safely from his first combat deployment and would fight overseas three more times, with "if not me, then who?" always in the back of his mind.

Erin, one of Brendan's five siblings, was sitting at work on that tragic September day, half a world from the crash site. She still mourned Travis, who "was like another older brother," when she lost Brendan.

"Our family is really close, and seeing everyone else upset is what upsets you the most," Erin said.

"The Looneys are an amazing family," Ryan, the executive director of the Travis Manion Foundation, emphasized. "They are very tightknit, like we are."

Amid dual tragedies that could tear any family apart, the Looneys and Manions came together. After Brendan's wife, Amy, said she wanted her husband resting close to his best friend, Travis' parents agreed to move their son's grave from Pennsylvania to Virginia. The heroes now rest side by side at Arlington National Cemetery.

"The ceremony was amazing, beautiful and heartbreaking," Ryan, who witnessed her only brother's burial for a second time, said.

Erin said that as kids, she and her siblings, three of whom went on to serve in the military, always wanted to hang out in Brendan's room — "the cool room" of the house. Today, she spends hours sitting in the Arlington grass, next to her big brothers in arms.

"We were so lucky to get to know them and be a part of their lives," Erin said, bringing tears to my eyes. "One is rare enough, but to have two, both brothers to you, is on a whole other level."

This new column's mission is to introduce you to the men and women who defend our freedom. As these stories arrive on your kitchen table every week, I hope you will feel as close to the wars in Iraq and Afghanistan as I did on Christmas morning, while bowing my head at the graves of 1st Lt. Travis Manion and Lt. Brendan Looney. Surrounded by fellow Americans, they will never be divided. 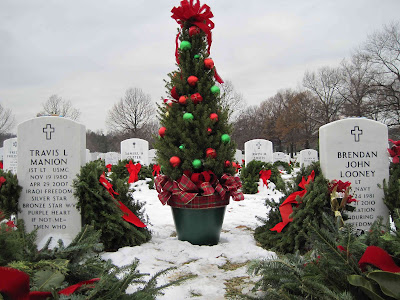 Note: The Unknown Soldiers now appears in newspapers as a weekly, nationally syndicated column. To read more personal stories of our nation's heroes, please call or e-mail your hometown paper and urge its editors to contact Creators Syndicate.