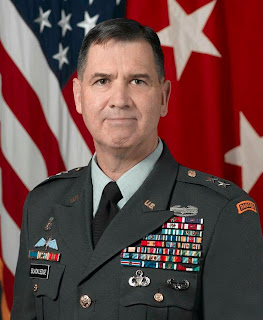 After six hours of driving to and from Jordan's border with Iraq, an exhausted Maj. Gen. David Blackledge wrapped up an early dinner with fellow U.S. Army officers at Amman's Grand Hyatt on Nov. 9, 2005.

As Blackledge's group walked past the hotel bar, a man sat down and ordered an orange juice. Moments later, as the soldiers walked toward the elevators, he blew himself up.

"It was pandemonium," Blackledge told The Unknown Soldiers. "Between people trying to get in and out, and the emergency workers, it was full of gridlock."

Flashing back to a harrowing 2004 ambush he barely survived during his prior Iraq war deployment, Blackledge knew the enemy too well to believe danger had passed.

"I told my fellow officers: 'We need to get out of here,'" Blackledge said.

The general's racing heart was met by the pounding pressure of another nearby explosion, which everyone felt in their chests as they raced through Amman's chaotic streets. Despite neck and shoulder injuries, Blackledge guided his group to an Italian restaurant, where officers were promptly whisked away to a safe house.

"The pain didn't really manifest itself until the next day because of adrenaline," the general said.

When Blackledge was blindsided by this terrorist attack on three hotels, which killed 60 and injured more than 100, he was still haunted by images of the ambush in Iraq 14 months earlier, which left him in a body cast. The general was heading to a tribal meeting near Iskandariya when heavy machine-gun fire blasted his convoy.

"My translator, who was sitting behind me, had been shot in the head," Blackledge recalled in a quiet, subdued tone. "As bullets flew through the windows, I was convinced that it was all over, and the next round was going to hit me, but I was going to go down shooting."

After narrowly escaping the flipped-over SUV and diving into a nearby ditch, the general ran back toward another one of three convoy vehicles, which had burst into flames.

"I tried opening the back door, got it open and saw it was just tangled bodies and blood," Blackledge said. "Then the captain said, 'Get me out of here,' because a translator was on top of him."

When Blackledge bent down to help his comrade, he felt a crippling shot of pain through his lower back. As the general later learned, his L3 vertebrae had been crushed in the SUV rollover. He was one of five injured in the enemy ambush, which killed one Iraqi translator.

While confined to a body cast for 11 months, Blackledge realized his injuries went far beyond his shattered back.

"I was constantly reliving the ambush," the general said. "It was nonstop and kept rolling in my mind."

Blackledge, who now commands the Army's Civil Affairs & Psychological Operations Command (Airborne), admits that he returned to duty too quickly after being wounded the first time. The subsequent Amman bombings, coupled with the stress of leading men and women into battle, pushed him close to the edge.

"The thing driving me crazy the most was the short attention span and difficulty concentrating," he explained. "My wife is an Air Force nurse with three combat deployments, and she had concerns about me."

After some initial coaxing, this battle-tested military leader, who has received the Legion of Merit, five Bronze Stars and two Purple Hearts since 1975, set the bar for a new, unofficial badge of honor. He asked for help.

"It was like a weight coming off my shoulders," the general said.

Blackledge, who still struggles with post-traumatic stress disorder but has benefited greatly from treatment, has an order for active duty service members and veterans. If you're hurting inside, or know someone who is, it's time to speak up.

"It's just like helping out a soldier who has a physical wound," Blackledge said. "We wouldn't stop or hesitate at that, but sometimes we're too reluctant when it comes to injuries we can't see."

While a general's nightmares about a terrorist ordering orange juice and enemy bullets piercing his SUV may never cease, the stigma attached to post-traumatic stress disorder, at long last, is beginning to fade.

Note: To read more columns like this one in your local newspaper, please ask editors to contact Creators Syndicate.