What does Memorial Day mean to you?

For some, it's about a rare weekday off to relax, spend time with family and friends, and perhaps grill some hot dogs and hamburgers. Pools are back open, baseball is on TV, and summer blockbusters have started hitting movie screens.

Of course, there is nothing wrong with enjoying a national holiday. But no matter how difficult or unpleasant, we must also remember the sacrifices that give us the freedom of enjoyment, especially in the aftermath of another terrorist attack on U.S. soil.

"I can't begin to explain the emotions that Carol and I experience every day," Aaron's dad wrote. "The grief is enormous!"

As the Taliban launches its annual spring offensive, thousands of U.S. troops are in harm's way. On May 4, five U.S. soldiers were killed by an improvised explosive device planted by terrorists in Maiwand, Afghanistan. 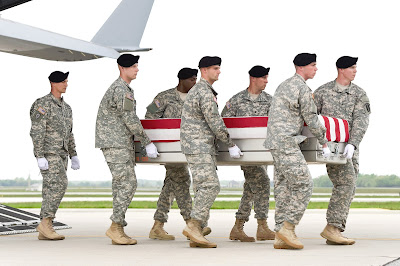 After being flown to Dover, Del., five flag-draped caskets arrived in American towns and cities from Meridian, N.Y. to Meridian, Idaho. The fallen heroes were brought home with honor and saluted by their families, friends and neighbors.

Less than two weeks after her son's death, Mary Murach wrote to his fellow soldiers still serving in Afghanistan on Facebook.

"Thank you so very much for your service to our country," she wrote. "Thank you for the sacrifices that you and your families make."

Even in their darkest, most difficult hours, the first instinct of America's Gold Star moms, dads, wives, husbands, brothers and sisters is often to thank others. While she will spend Memorial Day dealing with unimaginable pain, Spc. Murach's mother, like her son, sets a selfless example that every American should follow.

No matter what's going on in our lives, good or bad, we should always show appreciation to our men and women in uniform, veterans, fallen heroes and their families. While about one percent of our country volunteers to serve, 100 percent should be saying "thank you."

While speaking earlier this year with the mother of fallen U.S. Marine Lance Cpl. Edward Dycus, 22, she said her son was shot in the back of the head by an Afghan soldier who turned against the U.S. forces trying to help him.

Carol deals with grief that very few of us can comprehend. She also makes an important point.

It's hard to talk about the horrors of war and the price that so many military families have paid during almost 12 years of constant conflict. Explaining the price of freedom to our children is even more complicated.

But more than any other holiday, Memorial Day is a springboard for that discussion. Stated simply, every American child should grow up learning about our country's fallen heroes and what they were willing to sacrifice.

Just weeks before he was killed in Afghanistan, U.S. Army Spc. Douglas Green, 23, wrote a letter to his loved ones.

"I will always love and cherish all the time I was given on this earth and am thankful for this life and everyone in it," the soldier wrote.

Memorial Day is about being thankful. It's about being grateful not only for a day off work and a chance to grill hot dogs and hamburgers with family and friends, but for the opportunity to live in a nation that brave men and women are willing to step forward and protect.

To thousands of families who've lost loved ones to war, Memorial Day is one of the most meaningful dates on the calendar. It's the one day of the year that the nation officially pauses to remember the men and women who've sacrificed their futures for America's tomorrow.

What does Memorial Day mean to you? 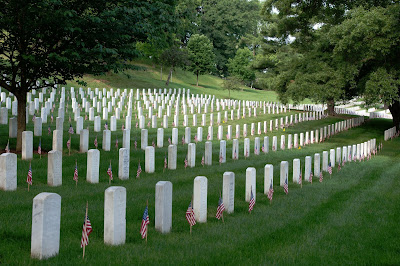 Image courtesy: Erin Kirk-Cuomo
Posted by Tom Sileo at 9:30 AM